Thanksgiving Day, Time to Express Your Thanks

Thanksgiving Day comes on the 4th Thursday in November.  It is a legal holiday celebrated throughout the United States.  People of all faiths celebrate this day.  They give thanks for the many good things in their lives.

This is a family holiday. Families come together from near and far. In some places special religious services are held in the morning. Then comes the traditional feast.  Turkey with stuffing is the main dish. It is served with sweet potatoes, squash, cranberry sauce, and pumpkin pie.  Apple cider is the drink of the day.  Football is the most popular game on this day.  For many schools, the Thanksgiving Day game is the most important one of the year. Usually there are several football games to watch on TV. 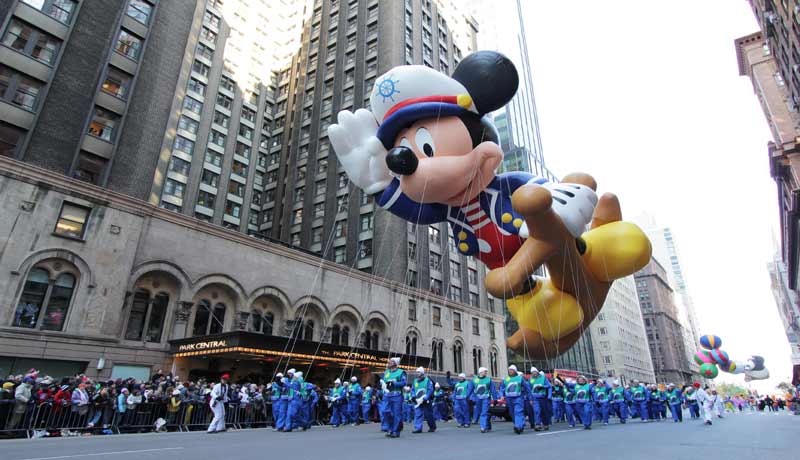 Stores, classrooms, and homes are decorated with turkeys, pilgrims, Indians, wreaths of dried flowers, and vegetables.  Horns of plenty are also very popular. Charitable organizations serve dinners to needy people.  They also send baskets of food to the elderly and sick.

The first Thanksgiving Day was celebrated by the Pilgrims on 1621.  They came from England for religious freedom.  They sailed from   Plymouth, England, on September 16, 1620.  Their ship was called  the Mayflower.  They landed at Plymouth Rock, in Massachusetts, on December 26, 1620.

The first winter was a terrible time.  There was much sickness and   starvation.  Native Indians taught the Pilgrims how to plant, to   fish, to hunt and how to survive in America.  The crops did well, and in the fall of 1621 the Pilgrims had a great harvest.  They were very thankful and decided to celebrate with a feast.  The Pilgrims invited their Indian friends to share this Thanksgiving feast. Thanksgiving was proclaimed a national day of observance by Congress in 1941. 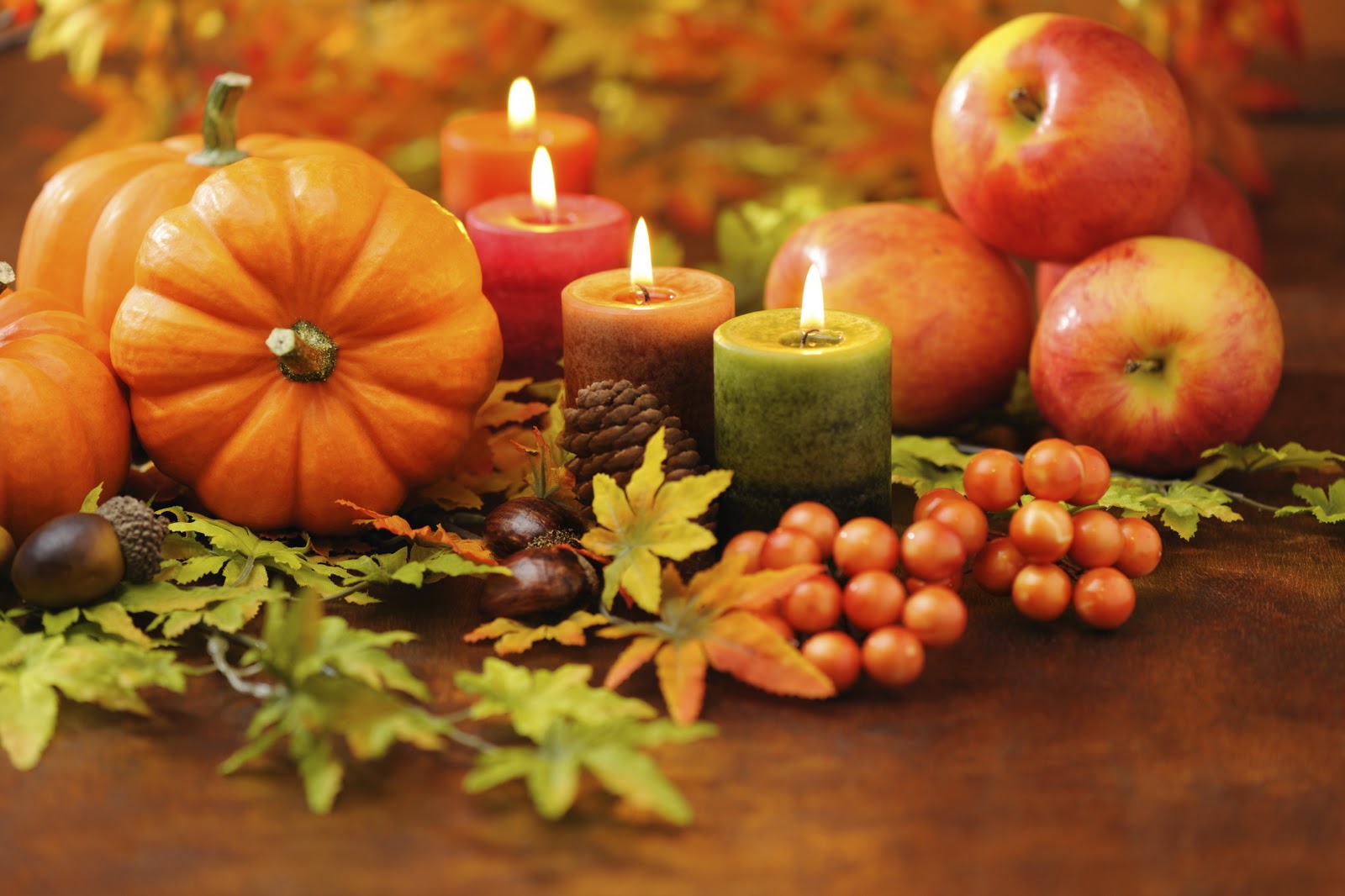 Thanksgiving is now celebrated as a legal holiday on the fourth  Thursday of November in the United States.  It is time to express  one’s thanks for good fortune throughout the year.  The first Thanksgiving Day in the United States is thought to have  been held on August 9,1607, by colonists of the Popham Colony,  which is now Phippsburg, Maine.  The first big Thanksgiving  celebration, however, is said to have taken place in 1621 in Plymouth, Massachusetts.  The Pilgrims and Indians feasted for  three days to celebrate their rich harvest after suffering a severe  winter following the Pilgrims’ long, harsh journey to America.

In 1789, George Washington proclaimed November 26 as Thanksgiving  in honor of the adoption of the United States Constitution.  Through the efforts of Sara Josepha Hale, the editor of Ladies’ Magazine in Boston, Thanksgiving became a national holiday observed on the same day every year.  She proposed the fourth Thursday of November because November 26, the day George Washington had  originally selected, had been the fourth Thursday.

In 1941,  President Franklin D.  Roosevelt proclaimed the fourth Thursday as Thanksgiving Day in all the states and U.S.  possessions.

Thanksgiving Day is associated with certain symbols and foods.  Turkey is part of the traditional Thanksgiving dinner, since it is believed that the Pilgrims and Native Americans had turkey at their   feast.

Cranberries are also part of Thanksgiving dinner, probably  because the Pilgrims had cranberries, which they found in bogs  around Plymouth.  The “cranberry”, as it was called, was used for  dye, as well as for food.

The horn of plenty, or the cornucopia, is a familiar Thanksgiving  symbol. It is a symbol of Earth’s bounty, and reminds us how much of our food comes from the earth.

Indian corn is used as a decoration.  The American Indians taught  the Pilgrims how to plant corn, which the pilgrims used to survive   their first winter.  To keep hostile tribes from knowing how many  Pilgrims had died, the Pilgrims planted corn over graves.

Today, Thanksgiving is the unofficial beginning of the Christmas  season, and in many cities and communities, Thanksgiving marks the arrival of Santa Claus.  Gimbel Brothers started this tradition with a parade of toys in Philadelphia in 1920.  The famous Macy’s Thanksgiving Day parade in New York City is part of the traditional celebration.  It is viewed on television by millions of  people each year. 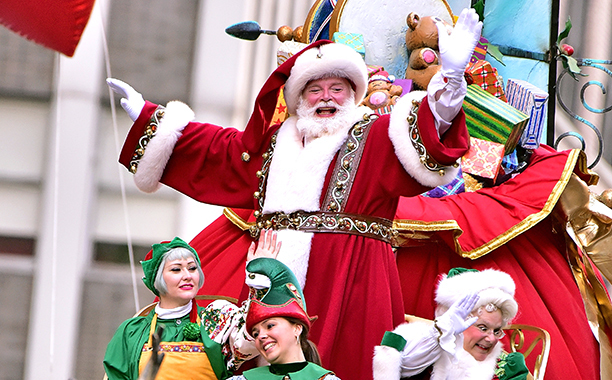 a. to stay alive

b. a large meal, a banquet

i. the collection of crops (fruits, vegetables)

j. the celebration of a holiday

Underline the word that does not belong.

Underline the word that best completes the sentence. 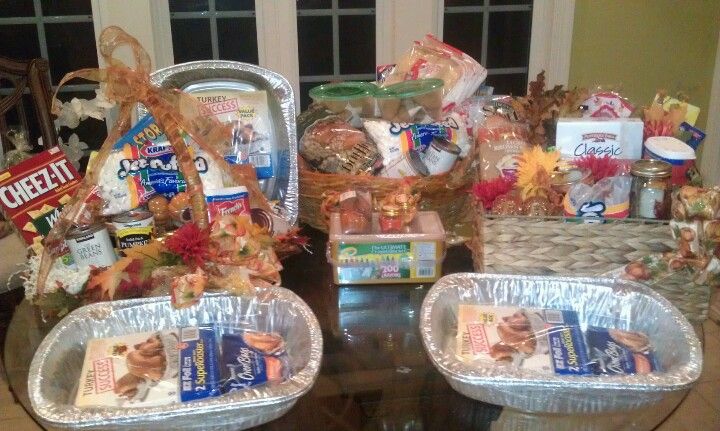 Ask questions about the sentences below. 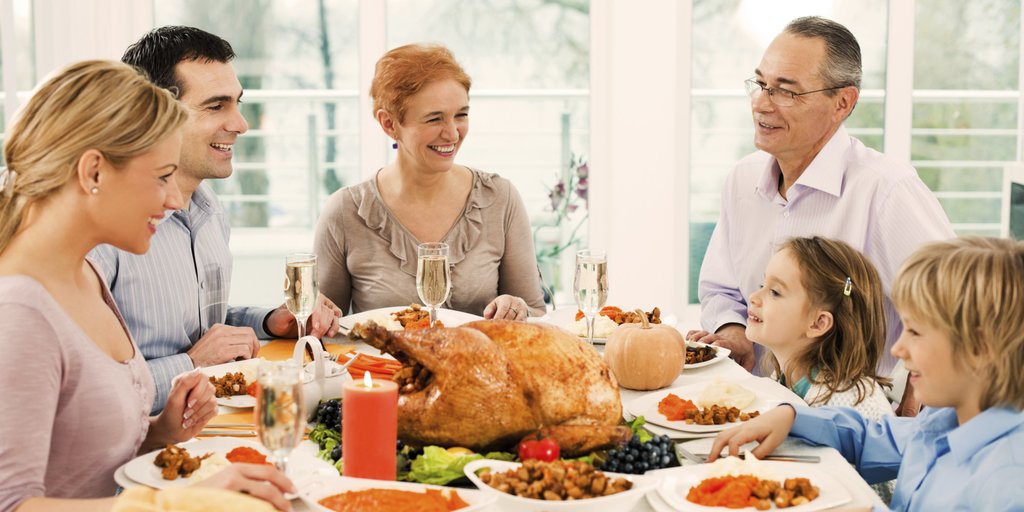 People of all faiths celebrate Thanksgiving in November.

The most famous Thanksgiving event in New York City is the Thanksgiving Day Parade. At the end of the parade Santa Claus arrives. People watching the parade feel excited and happy.

Charitable organizations send food to the needy and elderly.

Thanksgiving was proclaimed a national day of observance by Congress in 1941. 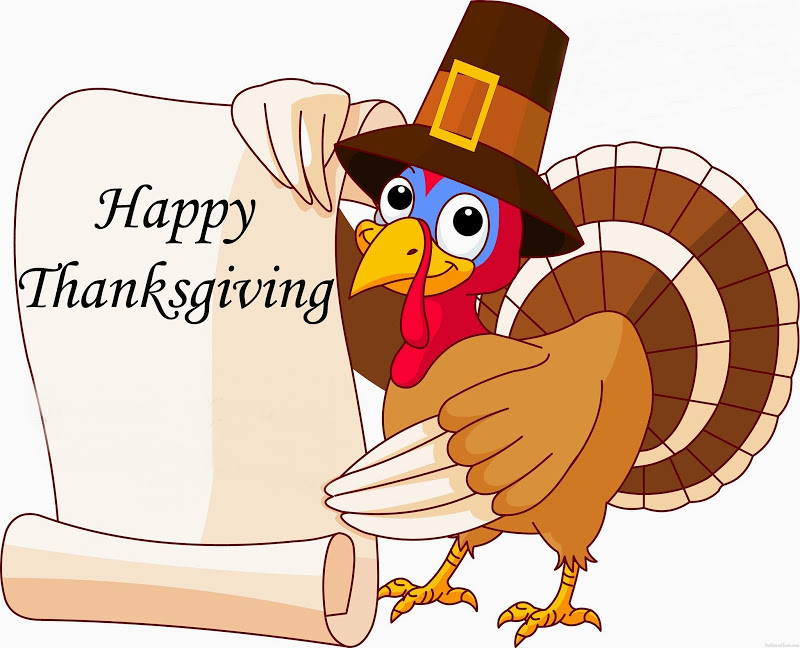