Diwali, the Festival of Lights

Diwali, the Festival of Lights

Popularly known as the Festival of Lights, Diwali has many interesting facts worth knowing.

One of the most popular festivals of Hinduism, it spiritually signifies the victory of light over darkness, good over evil, knowledge over ignorance, and hope over despair.

Its celebration includes millions of lights shining on housetops, outside doors and windows, around temples and other buildings in the communities and countries where it is observed. 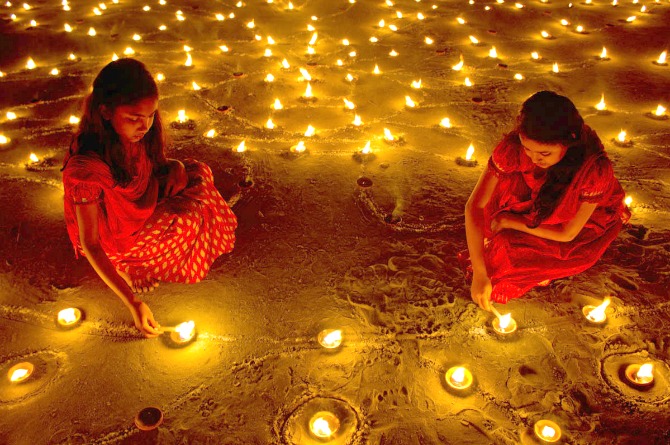 Diwali is an important religious festival originating in India. Hinduism is the major religion of India and is thought to be the oldest religion in the world. People often think of Diwali as a Hindu festival, but it is also celebrated by Sikhs and Jains.

For many people, Diwali honours the Hindu goddess of wealth, Lakshmi. The lights and lamps are said to help Lakshmi find her way into peoples’ homes, bringing prosperity in the year to come. 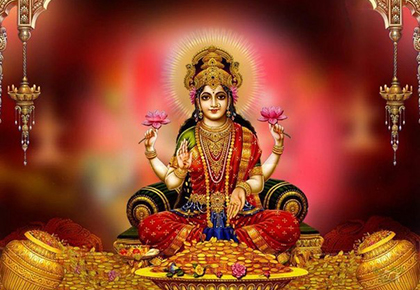 It’s also a celebration of good triumphing over evil, and different legends based on this theme are associated with Diwali. In northern India, Hindus celebrate the return of the deities (gods) Rama and Sita to the city of Ayodhya, after defeating the evil king Ravana.

In the region of Bengal people worship the goddess Kali, the destroyer of evil forces, during Diwali. And in Nepal (a country bordering north-east India), people celebrate Lord Krishna’s victory over the wicked king Narakaasura.

But it’s not just about lights and legends – Diwali is a time to have fun with friends and family. People exchange gifts and sweets, enjoy delicious feasts, watch firework displays and wear new clothes. It’s a time to clean and decorate your home, too.

Origin of the Name

The word Diwali (or Deepavali as it’s sometimes called) means “row of lights” in an Ancient language of India, called Sanskrit. During this festival, people decorate their homes with lights and oil lamps, called diyas. 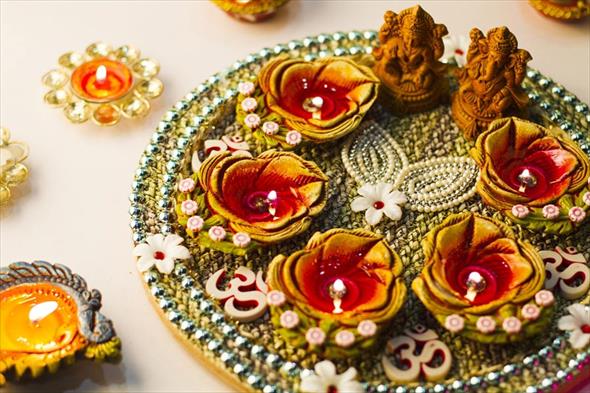 Diwali takes place annually and lasts for five days, marking the start of the Hindu New Year. The exact dates change each year and are determined by the position of the moon – but it usually falls between October and November.

The 5 days of Diwali include: 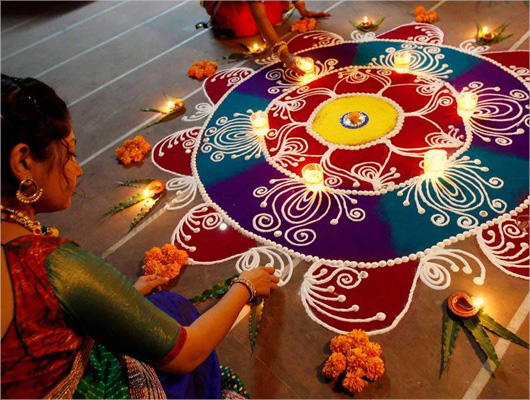 Although, Diwali is a festival of lights, however, colors also play a significant role on this day. Making Rangolis is also an integral part of Diwali celebration. Rangoli is a popular Diwali tradition – beautiful patterns made using colourful powders and flowers. People draw rangoli on the floor by the entrance of their homes to welcome the gods and bring good luck. Rangoli making is a timeless tradition in India, and it is meant that people make colorful Rangolis at the entrance of their homes to attract the goddess of wealth – Lakshmi.

Diwali Around the World 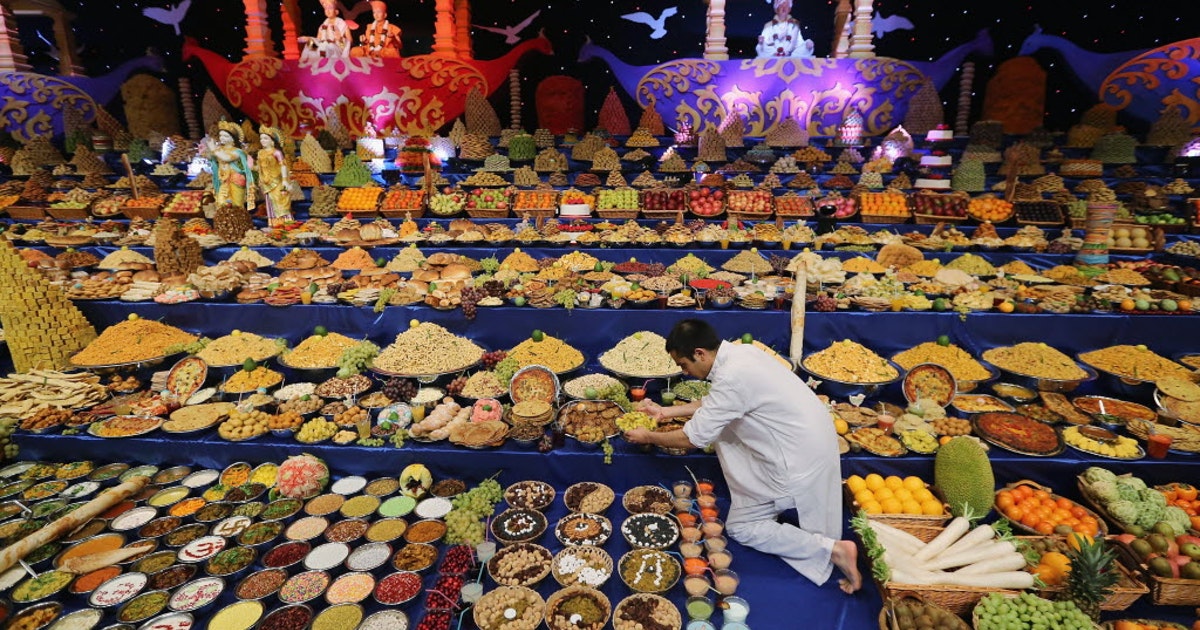 Today, this fascinating festival is celebrated by thousands of people in countries all around the world. During Diwali, Hindus living outside India gather at places of worship called mandirs to leave offerings to deities, watch firework displays and eat yummy food together!

The city of Leicester, in the United Kingdom, holds the largest Diwali celebrations outside of India. Every year,  thousands of people gather in the streets to enjoy vibrant shows of light, music and dancing. 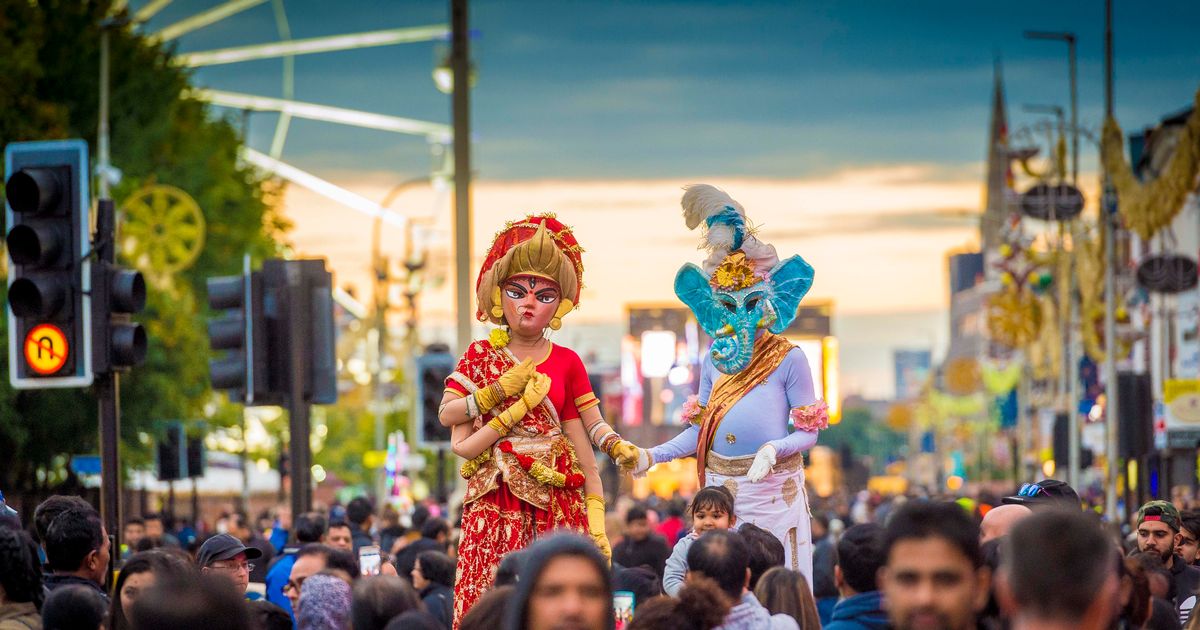