Halloween in the USA

Halloween in the USA

How about learning American customs and traditions?

Read and speak about Halloween in the USA.

The Beginning of the Holiday of Halloween

Hundreds of years before the birth of Christ, the Celts – the inhabitants of France and the British isles – held a festival at the beginning of every winter for the Lord of the Dead. These people believed that this god ruled the world in winter, when he called together the ghosts of dead people.

On October 31, these spirits of the dead came back in the forms of animals, with very bad ghosts as black cats.  At their festival on this day, the Celts used to make big fires to frighten the ghosts and chase them away. This celebration was the beginning of the holiday of Halloween.

The Romans, who ruled the British Isles after the birth of Christ, also had a celebration at the beginning of winter.  Because winter was harvest time, the Romans brought apples and nuts for the goddess of gardens.  Later, the Christians added their customs to those of the Celts and the Romans.  They had a religious holiday on November 1 for the saints (the unusually good people in Christianity), which they called All Hallows’ or All Saints’ Day. The evening before this day was All Hallows’ Even (holy evening); later the name became Halloween. 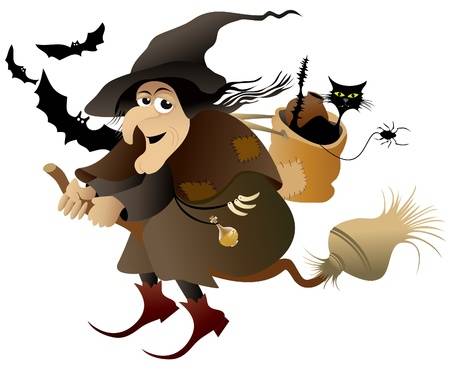 Long ago in Britain, people used to go to wise old women called “witches” to learn about the future.  They believed that these witches had the power to tell the future and to use magic words to protect people or change them.  There were many beliefs about witches, who are now a symbol of Halloween.  For example, people believed witches flew on broomsticks to big secret meetings, where they ate, sang and danced.  The Christians tried to stop people from believing in witches, but many uneducated people, especially in the countryside, held on to their beliefs.

When people came to North America from the British Isles, they brought their Halloween customs with them.  Today, Halloween is a night when children prepare the pumpkin called “Jack-O-Lantern” and put it in the garden, with a candle inside.  Then they dress up like ghosts, witches, devils and so on.  They go from house to house in their costumes, ring doorbells and shout, “Trick or treat!” If the neighbour says “Trick”, the children play a trick. Perhaps they burst balloons outside the house!  But the neighbour usually says “Treat”.  He then gives them candy, apples, gum and nuts, and the children have a good time.  But most children have no idea that their holiday has such a long history.

Speak about Halloween Celebration in Great Britain and the USA