I love animals very much. I have an unusual pet at home. It is a giant African snail.
His name is Christopher and he is five years old. My mother was presented with it at work. He is as large as a fist.

The native home of the giant African land snails is East Africa. They have also spread to a range of other countries across the world including islands in the Pacific and Caribbean, Asia and the United States. Their natural environment is tropical rainforests.
The giant African land snail, is the largest species of snail found on land and generally grow to around 20 cm in length. I have read that it can grow to the size of a human arm from hand to elbow.

Christopher is very fond of eating. He eats lettuce, cucumbers and apples. He likes bathing in the water all the time. Sometimes I wash him. Christopher likes sleeping as well. He sleeps most of the winter. He lives in a small quarium. In summer, he crawls around the aquarium.
I like my snail. Christopher is a good pet. He is my friend.

In some places giant African land snails are kept as pets while in several places they are invasive pests and owning them is against the law. They are considered one of the top 100 most invasive species in the world.

Giant African land snails are also used as a food source in some places though they can carry some diseases. 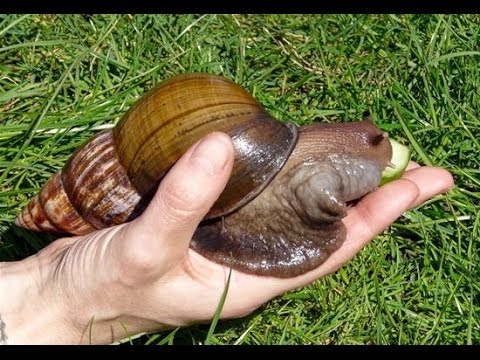