For students of elementary school: learn to speak about your trip to a city using the Past Simple Tense.

boat – човен
They crossed the river by boat.

view – вид
What a beautiful view!

amazing – дивовижний
The view of New York was amazing.

statue – статуя
There are lots of beautiful statues of animals in the park.

building – будівля, будинок
There are many beautiful buildings in Kyiv.

state – держава, штат
The United States of America is a big country. Ukraine is an independent state.

million – мільйон
Dinosaurs lived on the Earth millions of years ago. Millions of people visit New York every year.

top – верхівка, вершина
The view from the top of the mountain was amazing.

carriage – карета, вагон
We went for a ride in a horse and a carriage. There are ten carriages in this train.

avenue – авеню
The Fifth Avenue in New York is one of the most famous shopping streets in the world.

Fly High 3 A Week in New York: Have practice watching this presentation.

Fly High 3 A Week in New York: Would you like to know some interesting facts about New York City?

New York City is the largest city in the United States.

The city is divided into five major parts called boroughs. They are: Manhattan, Brooklyn, the Bronx, Queens and Staten Island.

Over 18 million people live in the city and around it.

In New York City there are about 5,600 skyscrapers. 48 of them are over 200 metres tall, which is the highest number of skyscrapers in one area in the world.

The New York City Subway is the largest subway system in the world.

The Statue of Liberty is the present of France to the US in 1886.

The index finger of the Statue of Liberty is 8 feet long. 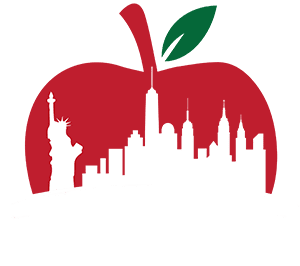 “The Big Apple” is a nickname for New York City. It is also called “The City that Never Sleeps”.

The nickname “The Big Apple” originated in the 1920s in reference to the prizes (or “big apples”) rewarded at the many racing courses in and around New York City.

In the 1920’s and 1930’s the nickname was used in horse racing and jazz music circles. Some think it was used to say that if you raced your horse or played your music in The Big Apple you were successful.

However, it wasn’t officially adopted as the city’s nickname until 1971 as the result of a successful ad campaign intended to attract tourists.

Throughout its history, the term “big apple” has always come down to simply mean the best and biggest of places to be, and New York City has long lived up to its nickname. Once you visit this seven-mile-long city, you’ll truly understand why it’s called the Capital of the World and the Big Apple.

The Empire State Building in New York City was named as one of the Seven Wonders of the Modern World.