What do you know about Vyshyvanka Day in Ukraine?

Read to know about Vyshyvanka Day in Ukraine and symbolic patterns of Ukrainian embroidery.

Ukrainians all over the world celebrate the day of the national embroidered shirt, or Vyshyvanka. Vyshyvanka Day in Ukraine is celebrated on the third Thursday of May, has turned into a global cultural diplomacy opportunity for the numerous Ukrainian communities around the world, and a national statement inside the country. The Vyshyvanka Day emerged as a flash mob not attached to any public holiday.

On this day Ukrainians wear vyshyvankas to demonstrate adherence to the idea of national identity. The day unites Ukrainians regardless of their gender, social status, religious beliefs or political opinions.

The vyshyvanka not only speaks of its Ukrainian origin but also of the particular region in which it was made. The knowing eye could detect where a person hailed from by the clothes on their back. Embroidery is thus an important craft within Ukraine and different techniques exist to suit local styles with their own particular patterns and colours. Traditionally, the thread was coloured according to local formulas using bark, leaves, flowers, berries and so on. In this way, the local environment is literally reflected in the colour of the embroidery.

JJ Gurga, Echoes of the Past: Ukrainian Poetic Cinema and the Experiential Ethnographic Mode

Embroidery is one of the main characteristics of Ukrainian clothing. The patterns of embroidery are different for different regions of the country. And they’re also very symbolic. There are guardian patterns, patterns that tell a specific story about the owner of the shirt, patterns that bring luck and so on. Usually white cloth is embroidered with red and black threads, but there are also some variations: white embroidery on white cloth, black on white, red on black, blue on white and colorful (red, black, yellow, green, orange, blue etc.) patterns.

Ukrainian embroidered shirt is not just an outfit; it is a true protective amulet. Vyshyvanka is used as a talisman to protect the person wearing it and to tell a story. Embroidery was used in vulnerable places on the garment where evil spirits could potentially enter the body: along the neckline, cuffs, shoulders, back and hem. 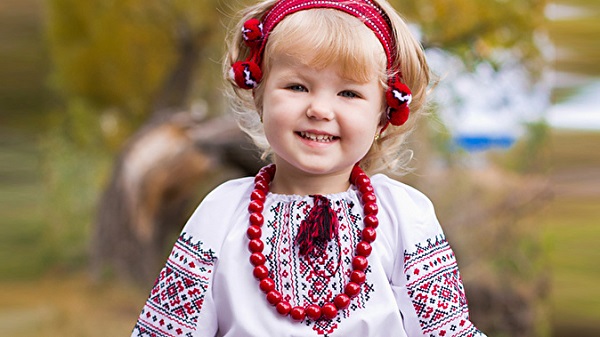 There are two variants of embroidery, manual and machine, which are used for male and female traditional Ukrainian shirts or vyshyvankas, dresses, towels (rushnyk) and household items, such as tablecloth, blankets and pillowcases.

Some interesting facts about vyshyvankas

The first embroidered garments on the territory of Slavonic countries had primarily religious meaning, and protected their owners from evil. That is why the shirts were decorated with ornaments on sleeves, collars, hem and everywhere where the body was open. There were special vyshyvankas for religious rituals and festive events. Embroidered shirts were given as presents to newborn babies in order to protect them from evil spirits.

Shirts have always been embroidered by women, and that is why they were strongly charged emotionally, symbolized goodness, love and loyalty. Our ancestors’ ancient spell said “The shirt on one’s body is white and clean, so let the husband’s attitude towards his wife be the same”. That is why the young girls had to embroider wedding shirts for their future husbands.

It turns out that vyshyvanka is one of the oldest Ukrainian attributes.  Greek historian Herodotus (425 BC) described Scythians’ clothes embroidered with different ornaments. 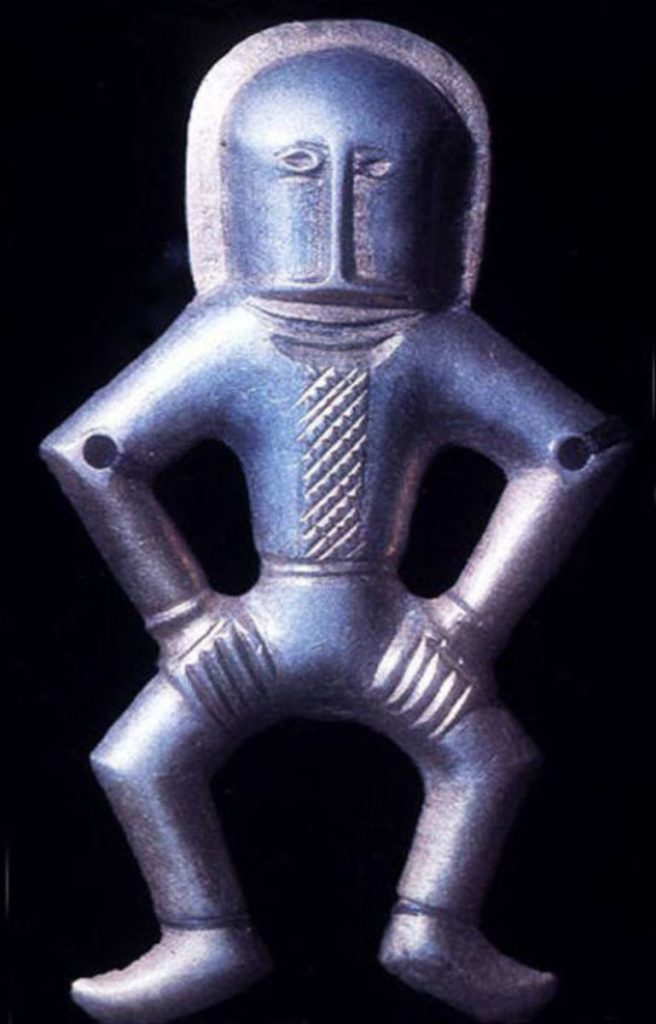 Within the modern region of Cherkasy (Kaniv is in Cherkasy region) archaeologists found the images of men wearing something reminding Ukrainian national costume. The finding dated back to the 6th century AD. Similar shirts were assigned to the Trypillians.

By the way, there is one more legend about special meaning of men’s vyshyvanka as a symbol of love. People say there should have been only one girl Chumack (Ukrainian salt merchant) could trust with washing his shirts. No one else could intrude into this sacred ritual. That is how Chumacks justified their loyalty to the beloved ones.

Archduke Wilhelm of Austria was a Ukrainian patriot who preferred wearing the vyshyvanka and was therefore known in Ukrainian as Vasyl Vyshyvanyi (Basil the Embroidered). The Vyshyvanoho Square was named in his honour in the city of Lviv. 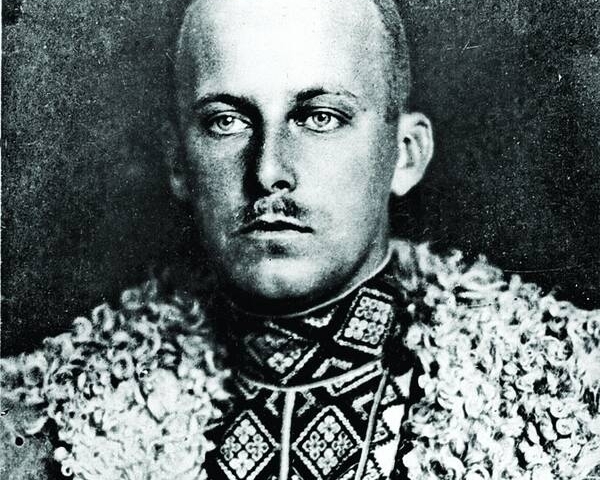 The first fashionable dresser who combined vyshyvanka with workaday clothes was Ivan Franko. He wore it under his jacket and together with modern garments. The writer appears on 20-Hryvnia note dressed exactly like that. 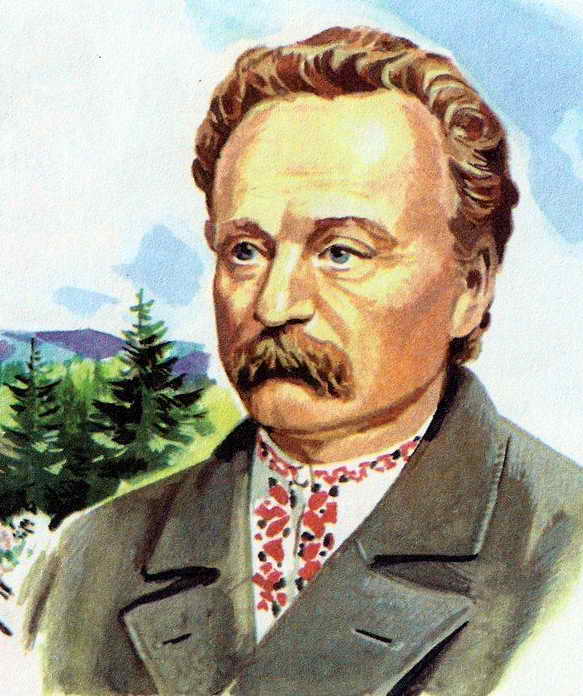 Each region of Ukraine has its specific vyshyvanka which differs from the others in embroidery technique and pattern. Actually, each area can boast its unique embroidered shirts.

A lot of patterns used in embroidery decorations root back to the pagan times. For instance, sun symbols (or “thunder symbol”, “the Wheel of Jupiter”) are connected with the pagan High God Rod.

One of the most original vyshyvankas is the one from Borshchiv area. It is peculiar because of the rich use of black thread. There is a legend explaining such pattern. Long time ago, the Turks and Tatars killed almost all local men, and for several generations women wore such vyshyvankas. Moreover, in Borshchiv temple there is a unique icon with the Holy Virgin dressed in such vyshyvanka. 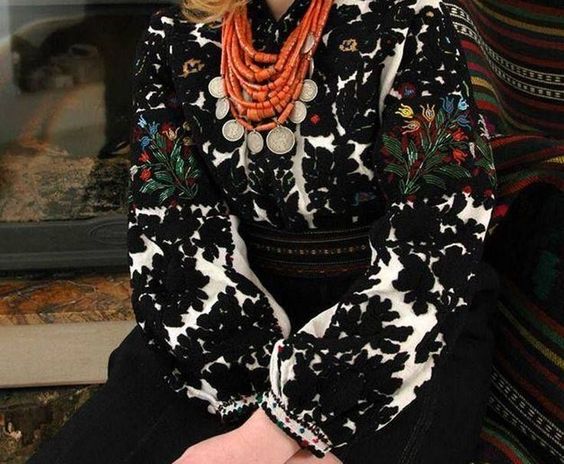 Ukrainian embroidery designs and stitches had a long period of creation throughout centuries, developing in such a way authentic Ukrainian style.

Needlework was traditionally considered to be exceptionally the women’s work. Cross stitching skill was inherited from grandmothers to mothers and then to their daughters.  Each family had its own recognizable symbols and patterns that made the great historical value for new generation. Nowadays some Ukrainian villages still have hereditary needlewomen, who can introduce national ornament features and teach some embroidery techniques.

Each Ukrainian region has its own distinctive features of stitches and patterns in embroidered clothes, which vary in color and embroidering techniques.

There are six basic colors, which are used in Ukrainian embroidery. Each of them has its symbolic value and meaning:

During the last centuries Ukrainian traditions of using special symbols in embroidery didn’t go away.  All needlework patterns can be divided into three groups: 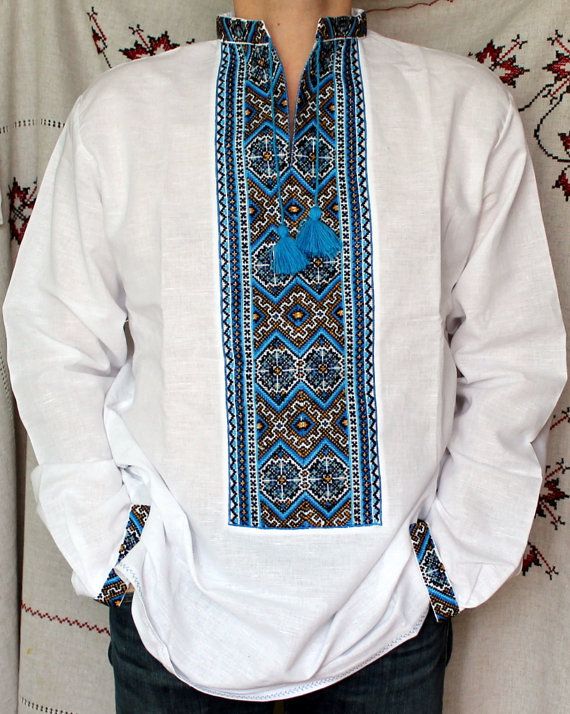 The first group of patterns is the most popular and is typical for Slavic mythology. Crosses, circles, oblique and wavy lines, rhombs, squares and spirals have their encrypted deep meaning:

The base of floral ornaments is people’s willing to depict the beauty of nature through the folk embroidery. The most popular ornaments are: oaks, grapes, viburnum, poppies, lilies, periwinkles.

Oak is a sacred tree, embodiment of the World tree, rising in heaven and connecting realities. In ancient mythology it is associated with the God of thunder and lightning Perun.

Oak is honored for its power, beauty and durability. People believed it could protect them from different diseases and evil sorcery. 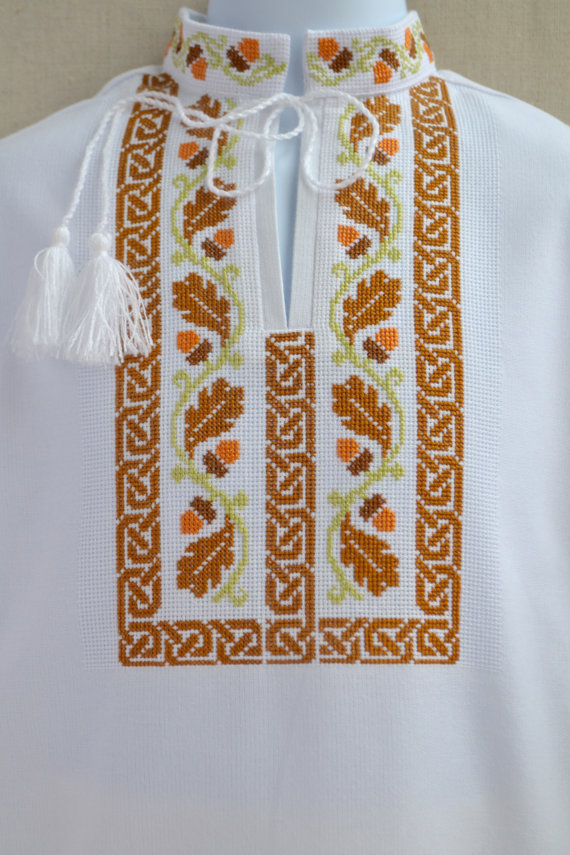 Viburnum is not just a symbol of Ukrainian embroidered clothes, but of the whole Ukrainian nation. Many years ago this shrub was thought to symbolize a burning trinity: the Sun, the stars and the Moon.

Bright red berries of viburnum are the symbol of blood and immortal generation, fire and the sun. That’s why all wedding rushnyks, Ukrainian tablecloth and vyshyvanka patterns are filled with bunches of viburnum.

The combination of oak and viburnum patterns on vyshyvanka symbolizes healthy power, beauty and life energy. 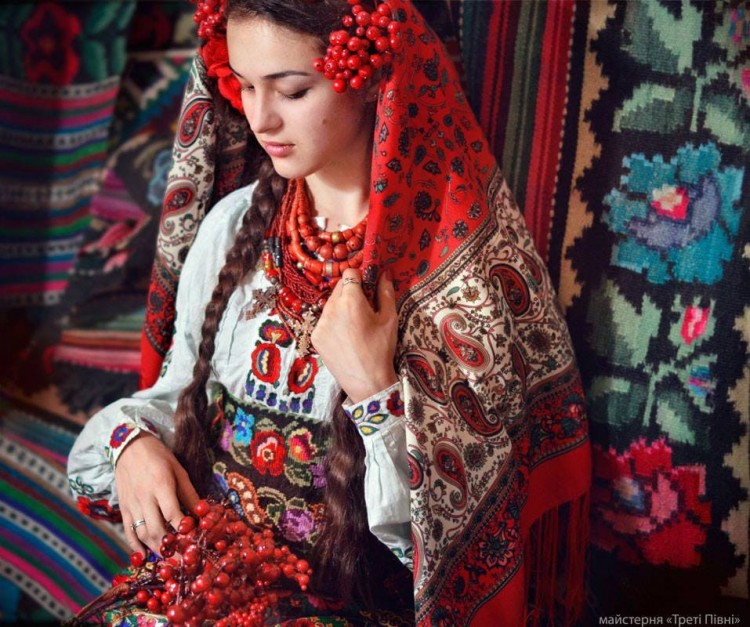 Since the ancient times poppy was believed to have magic power that could protect people from evil spirits. Poppies are also thought to emerge in places, where people died, from their blood drops. According to folk beliefs battlefield was always covered by poppies in spring. That`s why this tender red flower symbolizes the connection with ancestors’ world and eternity.

Grape is considered to be the symbol of fertility. It was used for making wedding wreaths and decorating wedding cakes.

Grape patterns are popular in embroidery of the central and northern Ukrainian regions. 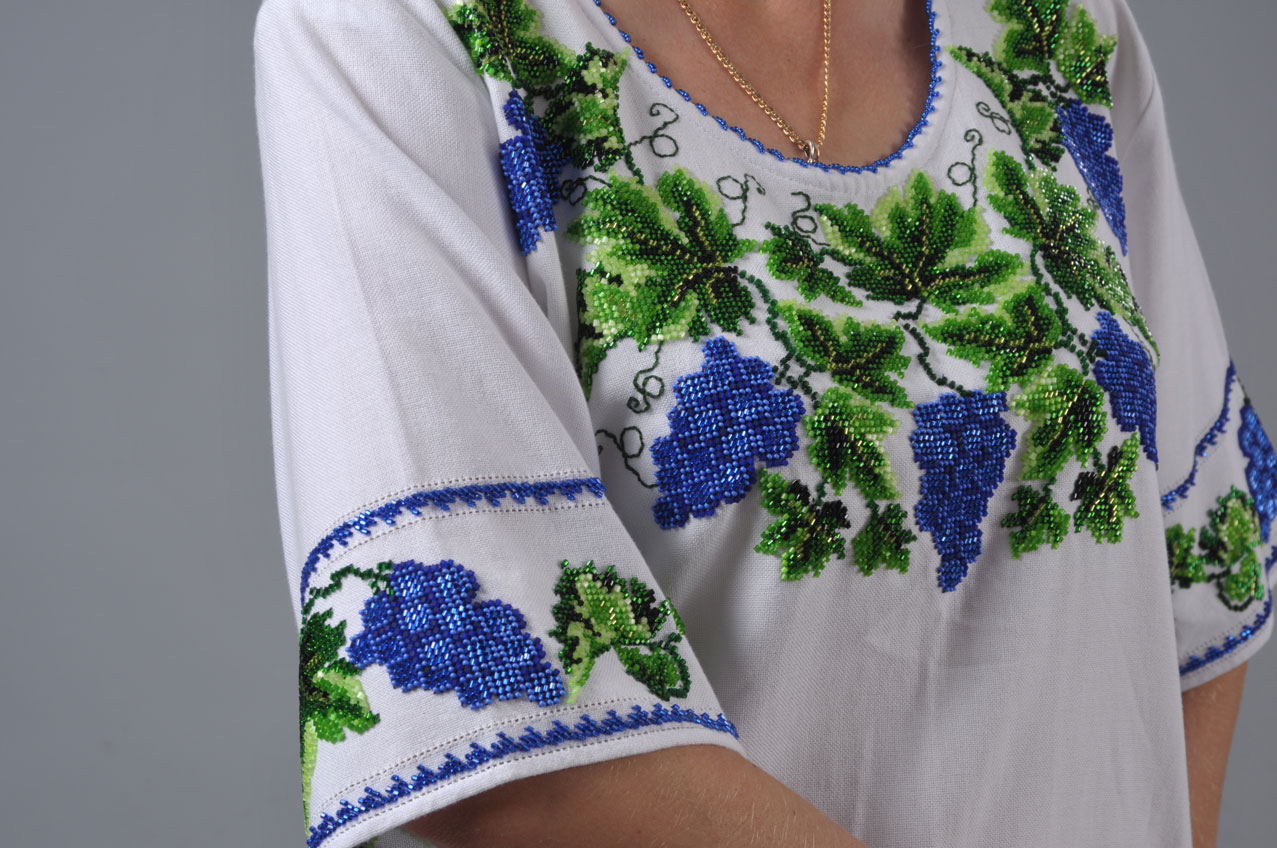 Lily flower keeps the mystery of life. Leafs and buds of lily are also an integral part of floral patterns, composing indissoluble trinity connection: conception, development and continuity of life.

In embroidered ornaments lilies are often combined with crosses, as the symbol of blessing for a happy married life. Sometimes dew drops are depicted over the lily, which mean fertilization.

Periwinkle is a “youth” pattern that symbolizes development and youth. It programs on achieving the goals and wishes. Periwinkle patterns are often used in wedding embroidery. 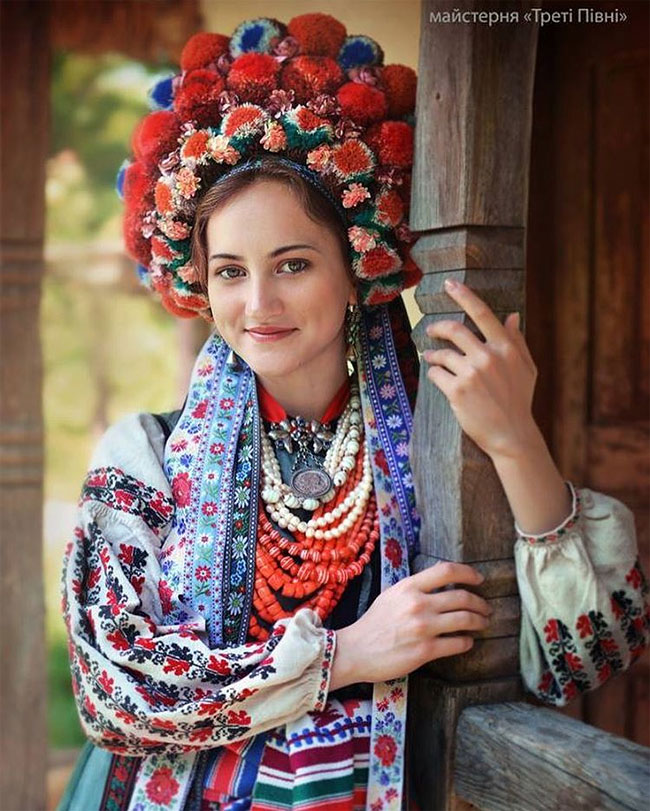 Cockscomb is considered to be the symbol of fire.

Peacock is a symbol of blossom and youth, family happiness. It is the Firebird that has the solar energy.

In Ukrainian embroidery peacocks holding viburnum berries in their beaks or sitting opposite one another on the tree symbolize a new family.

Cuckoo is one of the most mythical birds. Its symbolism is connected with death and other world. According to the folk beliefs cuckoos have the keys from the skyline and open it in spring for other birds.

In Ukrainian rushnyk and tablecloth patterns cuckoo is depicted on the viburnum branches and symbolizes procreation. 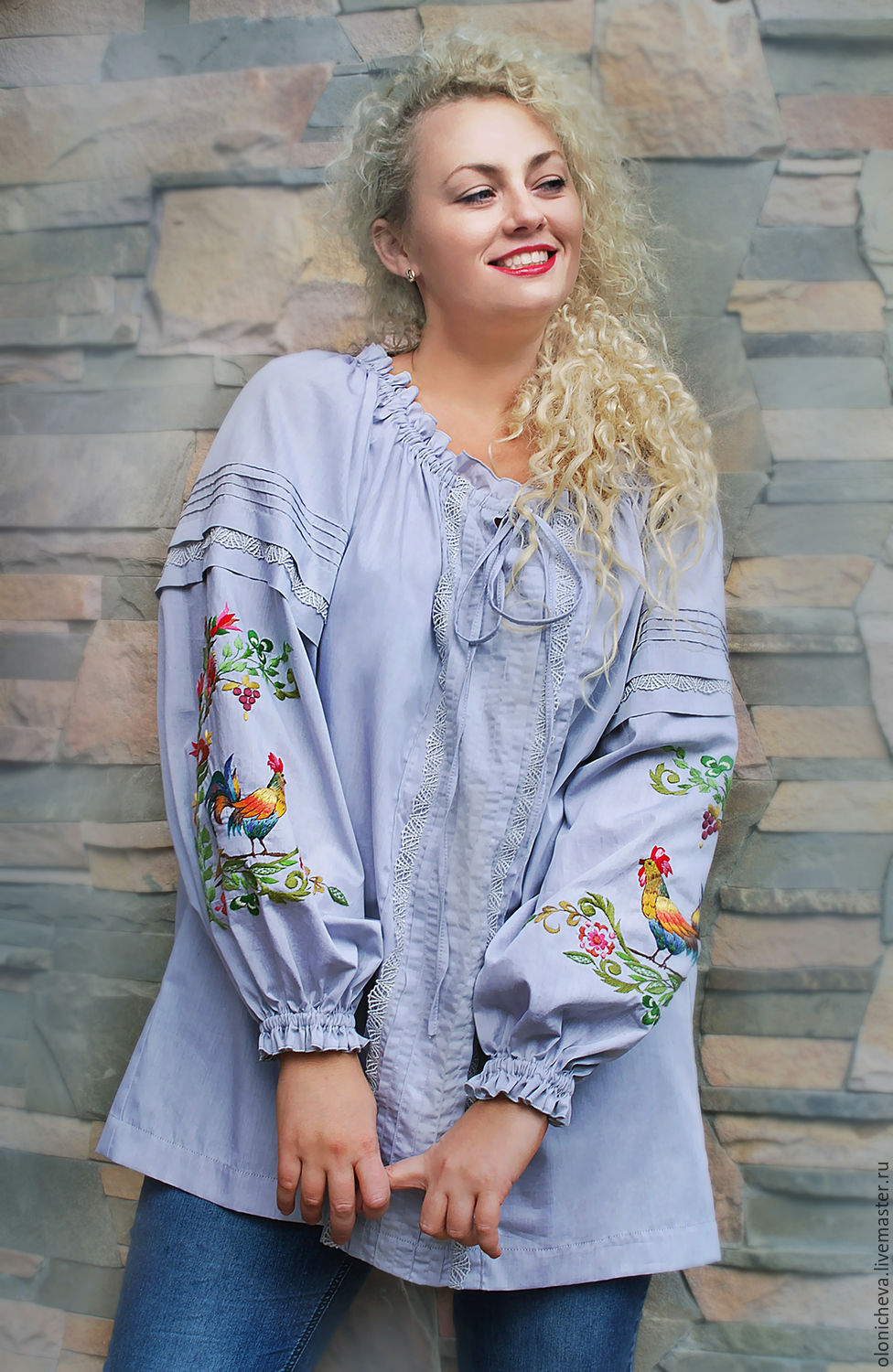