May 8th is Iris Day.

Irises are flowering plants with showy flowers that belong to the iris family.

It takes its name from the Greek word for a rainbow, which is also the name for the Greek goddess of the rainbow, Iris.

Iris is depicted as a beautiful golden goddess, with wings. Iris was the messenger of the gods, the link between sea and sky, the rainbow glider. Iris is very swift and fast and she generally travels by rainbow. It is even said that the reason the rainbow comes and goes so fast is because Iris only uses it for travel and since she is so fast, it is only in the sky for a small amount of time. 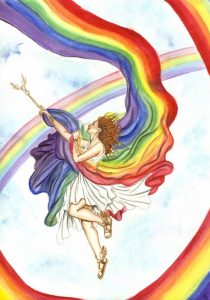 In Greek mythology it is believed that if you throw a drachma (Greek currency) into a rainbow you can communicate with anyone anywhere (like the Skype of ancient times).

Most of iris species originate from temperate parts of Europe and Asia.

Irises come in many forms, shapes, colors and sizes and the sword-like foliage is attractive when the plant is not in bloom.

Irises are perennial plants which means that it can survive more than 2 years in the wild.

Each stem produces 9 to 12 flowering buds. Iris blooms during the spring and summer months, and attracts various insects responsible for the pollination of flowers.

Iris garden in Florence, Italy and Presby Memorial Iris Garden in New Jersey are the two largest gardens in the world dedicated to the cultivation of iris.

In the ancient world, the Indian and Egyptian cultures were among those that used iris for medicinal purposes and for the manufacture of perfume. 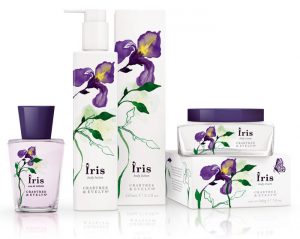 A wide variety of Iris cosmetics is available today

Centuries later, the practice of using dried iris rhizomes was a major industry in 19th-century Florence, Italy. The iris became the emblem of Florence. In neighboring Germany, iris roots were hung in barrels of beer to keep the beer fresh.

Juice squeezed from the plant can be used to improve condition of the skin.

During the Middle Ages, the meaning of irises became linked to the French monarchy, and the Fleur-de-lis eventually became the recognized national symbol of France.

Fleur-de-lis is a French term that refers to a stylized drawing of a flower. The drawing is associated with royalty and heraldry. It has also been used to represent the Virgin Mary. 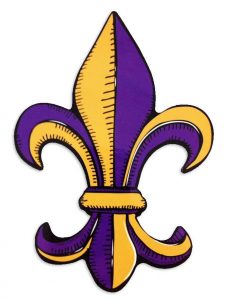 Although the term fleur-de-lis means “flower of the lily” when translated into English, the drawing actually looks like an iris. It has often been suggested that the word lis is actually a corruption of a word iris.

The sign of Ukrainian youth organization PLAST  is Ukrainian Trident (“Tryzub”) and white three-leaved lily. Three-leaved lily, known as Fleur-de-lis, is a symbol of scouts in the whole world, in different countries differently combined with other symbols.

This emblem became a symbol of ideal unity of the whole PLAST movement – on native lands and abroad. Three leaves of a lily reflect three main duties of a Plast member; Trident shows that PLAST is a Ukrainian youth organisation. 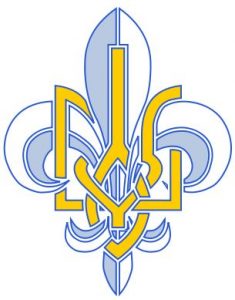 The form and the way of combining the Trident and lily invented Myron Fedusevych, teacher of a middle school. Artistic design was given to it by Robert Lysovskyy – an artist, painter. The PLAST emblem, as an official sign, is used by PLAST leaders, older members and institutions – on their flags, stamps, official publications, documents, etc.

Those PLAST members who had completed the oath are wearing it as a sign of them being a part of PLAST.

The Purple Iris is the state flower of Tennessee, and the Fleur-de-lis is the emblem for the city of New Orleans.

A flower on the Sphinx is considered to be an Iris.

Interestingly, it is thought that it was the origin of the scepter (an ornamented staff carried by rulers on ceremonial occasions as a symbol of sovereignty). The Egyptians placed iris on the brow of the Sphinx and on the scepter of their kings, the three leaves of its blossoms typifying faith, wisdom and courage. 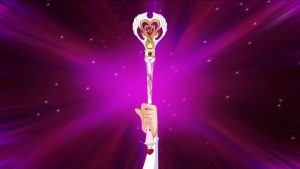 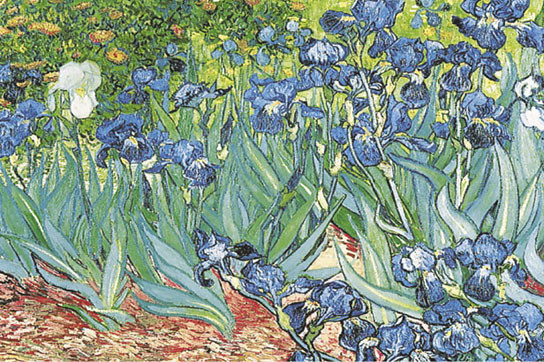 Iris is the symbol of Brussels. 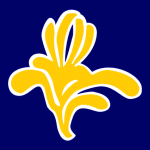 Iris is the flower for 25th wedding anniversary.

The iris is the February birth flower.

Irises are very popular among homeowners and gardeners.