On the 26th of April 1986 a catastrophe broke out. It was the major break-down of the power unit at the Chernobyl nuclear power station. It is the most severe catastrophe throughout the entire world history of the atomic energy use by its scale, complexity and long-term consequences.

As the result of the explosion of the failed reactor a huge amount of radioactive substances was released into the atmosphere. Later on they left the large fall-out «spots» on the ground surface. The territories of Ukraine, Belarus and Russia were contaminated.

The radiation situation was determined by radionuclides with the period of half-decay from 8 days till 24390 years.

The Chernobyl catastrophe has affected the destinies of millions of people. The radioactive contamination of the ecosystems has created the conditions for making it impossible to conduct the agricultural production and manage forestry in the normal way for many decades.

Measures were taken to evacuate the people from the most dangerous districts, to decontaminate the territory. International cooperation in this field serves the interests of the entire mankind. 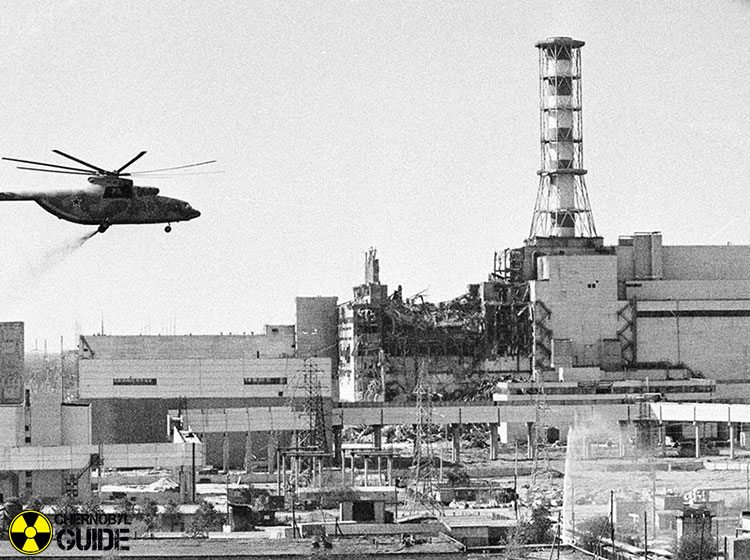 In the spring of 1986 the people of Prypiat in Ukraine were enjoying unusualy warm weather. It felt as thought summer had come early. Unseen and unknown to them, just three kilometers away workers at the Chornobyl power plant were preparing to test the fourth nuclear reactor on the site. It was not a routine test, but one to check that the emergency cooling system worked, as there were fears that it might be out of order.

The result of the test was unexpected and catastrophic. At 1:23 a.m. on 26 of April 1986, the worst nuclear power plant accident in history started to unfold. There was a surge in power, followed by a further surge when the workers tried to shut down the reactor. The explosions and fires that followed released a huge amount of radiation into the atmosphere. The wind spread the radiactive dust, carrying it over Ukraine, Belarus, Russia and other countries. In Sweden, over one thousand miles from Chornobyl, alarms went off at a power plant in Forsmark. The radiation levels were too high.

Several workers at the plant and some of the emergency workers who were sent to put out the fires died immediately in the fire and from radiation poisoning. Many others developed serious diseases, such as thyoid cancer, in the following years. Across the region, the disaster has affected thousands of people.

It was clear that the situation was dangerous and the authorities decided to move the people living in Pripiat, the nearest town, to somewhere safer. Around 50, 000 people left the city in the first evacuation and over the next few months a further 150,ooo moved from the contaminated surrounding area. Although some people refused to leave their homes, the majority were evacuated and now live in settlements elsewhere, some in Ukraine, some in Belarus and others in Russia. Currently, there is a thirty-kilometer exclusion zone around the plant. Very few people live there and Prypiat and the other 187 small towns and villages within the zone have remained ghost towns to this day.

However, the area is not completely deserted. In the years since the disaster, animals have moved in. The site has become a refuge for birds and rareand endangered species such as lynz, boar, elk, wolves and even bears. The exclusion zonemis far from the the nuclear wasteland that people expected at the time of the disaster. In the summer of 1986 few people would have predicted that there would now be proposals to turn the area into a nature reserve. 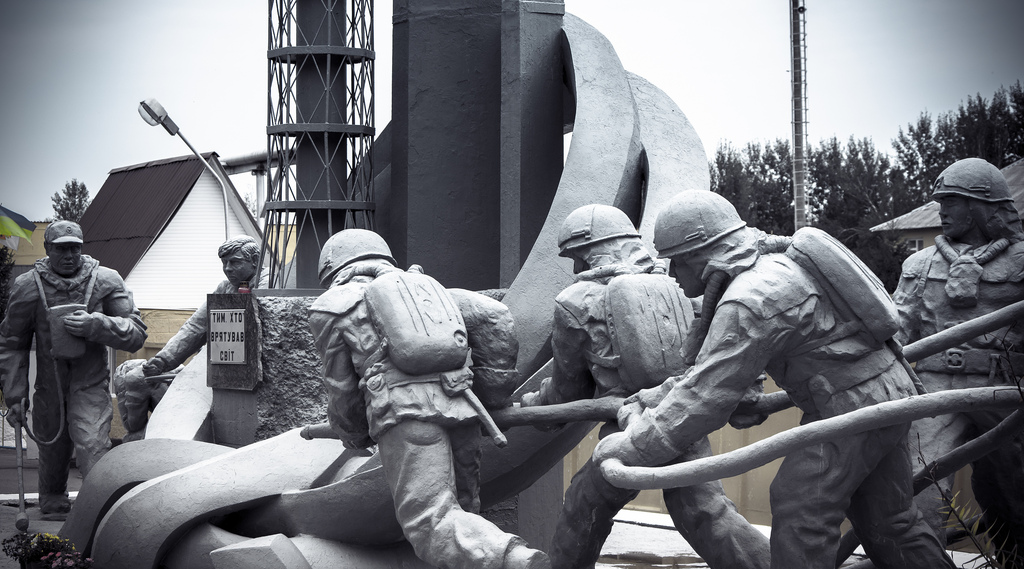 Memorial for firefighters in Chornobyl

A Chernobyl fireman who claimed they didn’t know that the Chernobyl meltdown flames were radioactive, 20 years later said, “Of course we knew! If we’d followed regulations, we would never have gone near the reactor. But it was a moral obligation – our duty. We were like kamikaze.”

Complete the phrases with nouns:

Read the text again and answer the questions. 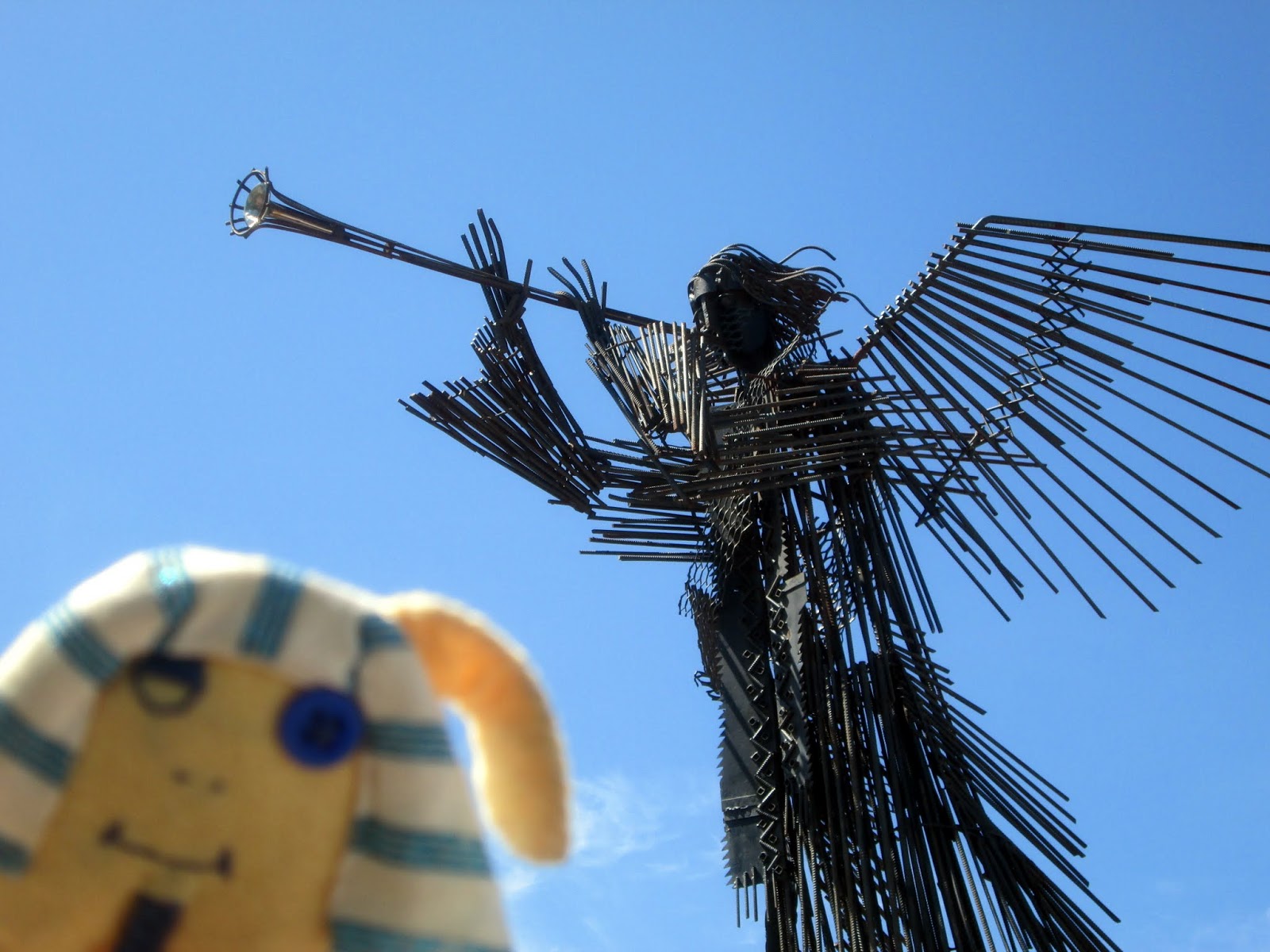 It is now possible to visit Prypiat and the exclusion zone on a day trip. Why do you think people would want to do this? What could you learn if you went on such a trip? Write no less than 60 words.

The Chernobyl disaster remains the only level 7 incident on the international Nuclear Event Scale (INES) making it the biggest man-made disaster of all time.

The disaster released at least 100 times more radiation than the atom bombs dropped on Nagasaki and Hiroshima.

Nuclear rain from the disaster fell as far away as Ireland.

800,000 men risked their lives by exposing themselves to radiation in order to contain the situation. 25,000 of these have died and 70,000 are disabled.

The accident has caused the Soviet Union, the Russian Federation, and Ukraine hundreds of billions of dollars.

A make-shift cover — the ‘Sarcophagus’ — was built in six months after the explosion. It covers the stricken reactor to protect the environment from radiation for at least 30 years.

A concrete sarcophagus was built around the destroyed reactors. It contains 100 kg of plutonium, with a half-life of 245,000 years. Should the sarcophagus collapse, it would be enough to poison 100 million people.

International donors agreed to help finance the new convex structure which will slip over the aging ‘Sarcophagus’ and allow the old reactor to be dismantled. Officials say it could be up to 100 years before the station is completely decommissioned. 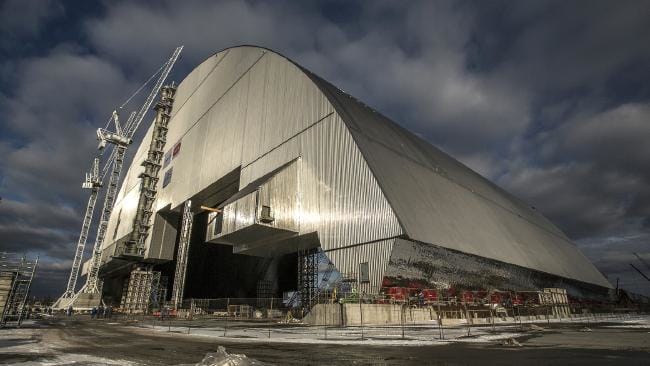 The area surrounding Chernobyl will not be safe for permanent human settlement again for another 20,000 years.

Only 31 people actually died during the event. Most of the deaths happened later as a result of the radiation.

The dead trees and fallen leaves near Chernobyl aren’t decaying.