PLAST is a Ukrainian youth organization based on the principles of the Boy and Girl Scout movement.

PLAST in Ukraine came into being in the city of Lviv in 1911. It was founded by Oleksandr Tysovsky, a teacher, Ivan Chmola, a teacher, and Petro Franko, a researcher (he was a son of Ivan Franko, a prominent Ukrainian author of the late 19th – early 20th century). The first PLAST groups were created at the Lviv Academic Himnaziya (secondary school of advanced studies). It was in the courtyard of that school that the first Plastuny (Plastun — a member of the PLAST) took an oath of loyalty to God and Ukraine on April 12 1912. This date is considered to be the PLAST Foundation Day in Ukraine.

The name PLAST was taken from the Cossack word “plastun” — “scout” which was used in the seventeenth century to define Cossack troops involved in scouting. 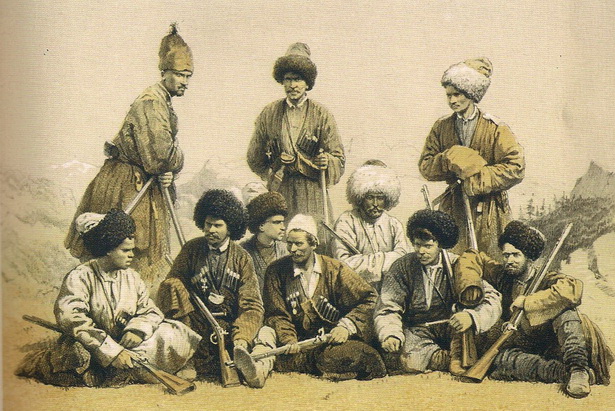 The first PLAST textbook was published in Ukraine in 1913. It was written by Oleksandr Tysovsky; the book written by Petro Franko, Plastovi ihry ta zabavy (PLAST Games) was published the same year. The summer of 1913 saw the first gathering of Plastuny at a PLAST camp.

The war disrupted the further development of the PLAST movement in Ukraine, but as early as in 1918, when the Civil War was still raging in Ukraine, the first PLAST group was founded in the city of Chernihiv by Vasyl Plyushch, a doctor of medicine and historian of Ukrainian medicine. Yevhen Slabchenko, who later became a film director, founded PLAST kureni (kuren’ — literally means “a hut” but in reference to PLAST it is used to define a PLAST group or detachment). PLAST kureni were established in quick succession later that year in Hlukhiv, Kyiv, Zhytomyr, Kharkiv, Katerynoslav, Kaniv, Vinnytsya and Odesa. Hetman Pavlo Skoropadsky, the then Ukrainian head of state, issued a decree in the summer of 1918 to have scout organizations established at secondary schools. The PLAST kureni appeared in various parts of Ukraine; they were particularly popular in Halychyna, Zakarpattya and Volyn.

The Bolshevik power that came to Ukraine after the Civil War, put an end to the PLAST organization and created its own organizations for youth — Pioneers and Komsomol (Young Communist League). In western Ukraine, which at that time was under the Polish domination, PLAST organizations continued to exist and in 1930 the PLAST numbered about 6,000 members. The Metropolitan of the Ukrainian Greek Catholic Church Andriy Sheptytsky encouraged and promoted PLAST activities.

In 1939, after the soviet troops invaded Poland and western Ukraine was joined to the rest of the country, all nationalist organizations, PLAST included, were dissolved and banned. Plastuny were among the first to be subjected to soviet repression. In the summer of 1941, the soviet secret police arrested and executed Petro Franko and Ivan Chmola. 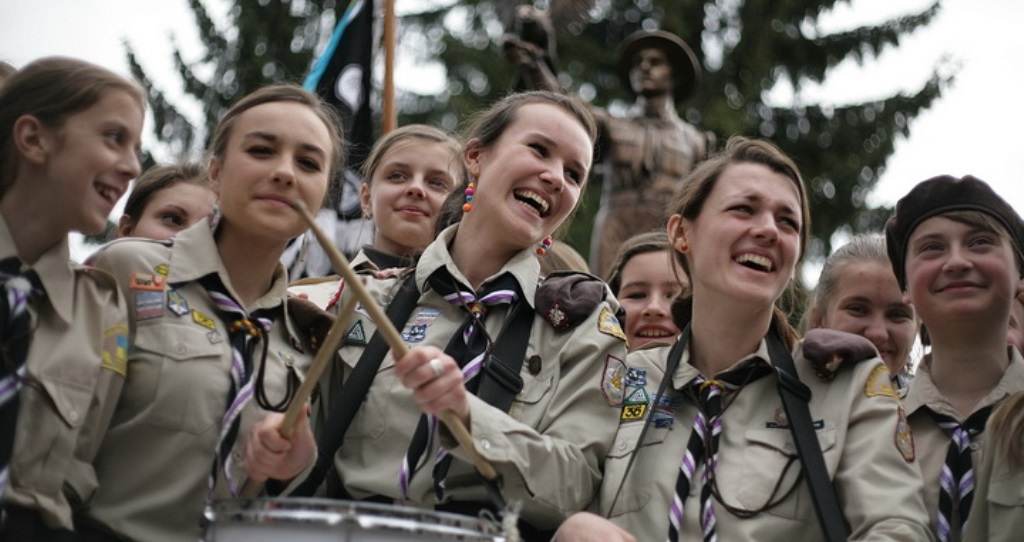 It was in 1989 that the PLAST movement began to be resurrected in Ukraine with the first PLAST groups emerging in the Land of Lvivshchyna. The next few years saw proliferation of PLAST organizations in several Oblasts of Ukraine — Ternopil, Ivano-Frankivsk, Volyn and Zakarpattya, in particular.

In the spring of 1991, Ukrainian Plastuny went to South Korea to take part in the 17th World Jamboree (Congress) of Scouts, and in 1993 a Jubilee PLAST Meeting was held in Lviv to mark the 80th PLAST Anniversary. The meeting was attended by PLAST representatives from Germany, Canada, the USA, Poland, Australia, Argentina and Brazil. 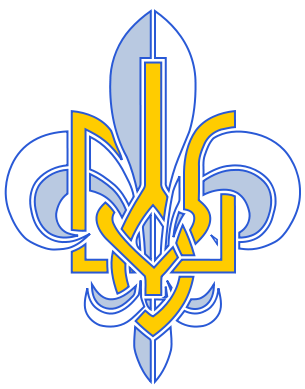 The 95th PLAST Anniversary was celebrated at the Jubilee PLAST Meeting in Canada in 2007, which also marked one hundred years since the foundation of the Boy Scout Organization. About 1,500 participants from the USA, Canada, Poland, Australia, Ukraine, Germany, France, Belgium and Austria attended the meeting.

In 2007, enthusiasts of the Pamyat’ (Memory) Society found a PLAST flag in the basement of an old building in Lviv. The flag, which dates from 1927, was blessed by the Metropolitan of the Ukrainian Greek Catholic Church Andriy Sheptytsky at the Cathedral of St Yura (St George) in Lviv in 1929. When the war broke out in 1939, this flag was given for safe keeping to Oleksandra P’yasetska-Protsyshyn, the aunt of one of the members of the Lviv PLAST Kuren’ Lisovi Chorty. Fearing the soviet reprisals, Ms P’yasetska-Protsyshyn cut the flag in two and the part that had the PLAST symbols and the Trident — Ukrainian state symbol — on it was hidden in the basement. It is almost a miracle that the flag has survived the war and the years of the soviet regime.

The half of that PLAST flag that was preserved by Ms P’yasetska-Protsyshyn was taken to the USA by Oleksiy, her nephew, in 1989. When he came back to Ukraine in 2006 he began his inquiries about the other half of the flag. Ms Lyudmyla Starosolska, an elderly person, who was Ms P’yasetska-Protsyshyn’s friend, remembered nevertheless the place where the half of the flag that Oleksiy was looking for had been hidden and her memory did not fail her — the flag was recovered at the place she had indicated. Later it was put on exhibition in Lviv.

At present, the PLAST of Ukraine has a membership of 10,000 Plastuny of different ages; there are 120 local PLAST centers, each made up of different age groups. The youngest age groups include 6-year-old youngsters; the Seniors include 35-year olds and older members, who want to remain Plastuny to the end of their lives. They usually devote much of their time to educating the young in the spirit of PLAST. 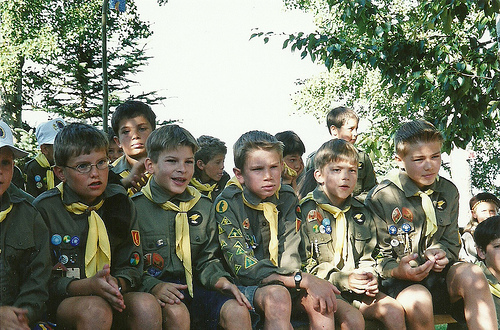 The basic aim of the PLAST in Ukraine is to promote comprehensive patriotic upbringing and education based on the principles of Christian morality. The PLAST fosters social and civil attitudes, awareness of local and world society needs; members of the PLAST are expected to be the leaders of society.

The PLAST oath runs like this: “I swear by my honor that I shall do everything in my power to be loyal to God and toUkraine, to help others, to obey the PLAST Law and the PLAST leadership.” 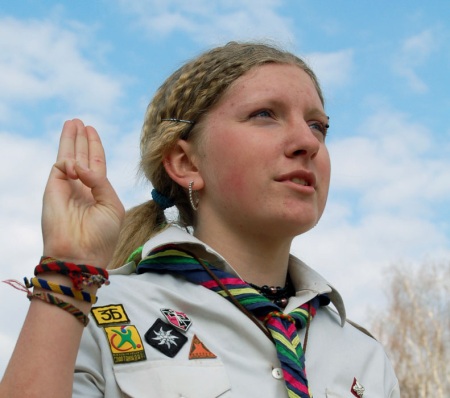 The PLAST Law is a moral code of behavior of every Plastun. It is instrumental in shaping the Plastun personality.

The PLAST Law says that each Plastun must be truthful, conscientious, punctual, economical, just and fair, courteous, benevolent, levelheaded, helpful, disciplined, diligent, caring for their health, loving beauty and cheerful.

The basic PLAST principles are as follows: voluntary participation; education through play and games; well-defined programs and stages of achievement; groups as the basis of self-organization; promotion of initiative; study of nature; regular outdoor activities; promotion of talents and interests.

PLAST members can stay at PLAST camps for the whole summer if they desire so. Camp activities include winter and summer sports of all kinds, art, mountain climbing, archeological expeditions, horse riding, environment protection, plus a lot more. 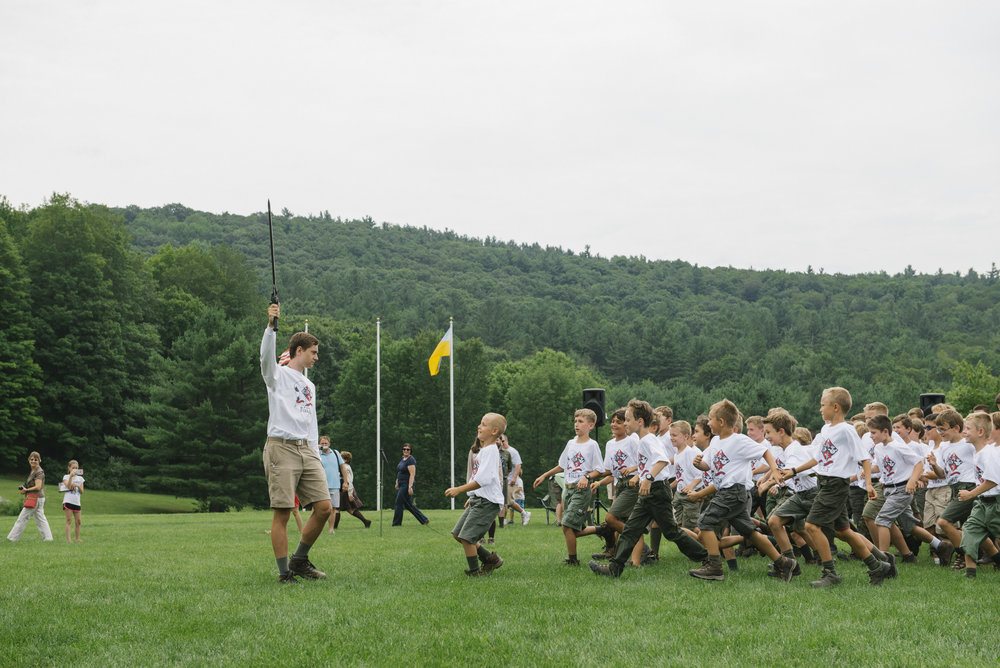 Staying at a PLAST camp gives young people an opportunity to test themselves, to improve their health and engage in many kinds of exciting activities.

Among the prominent PLAST members were and are: 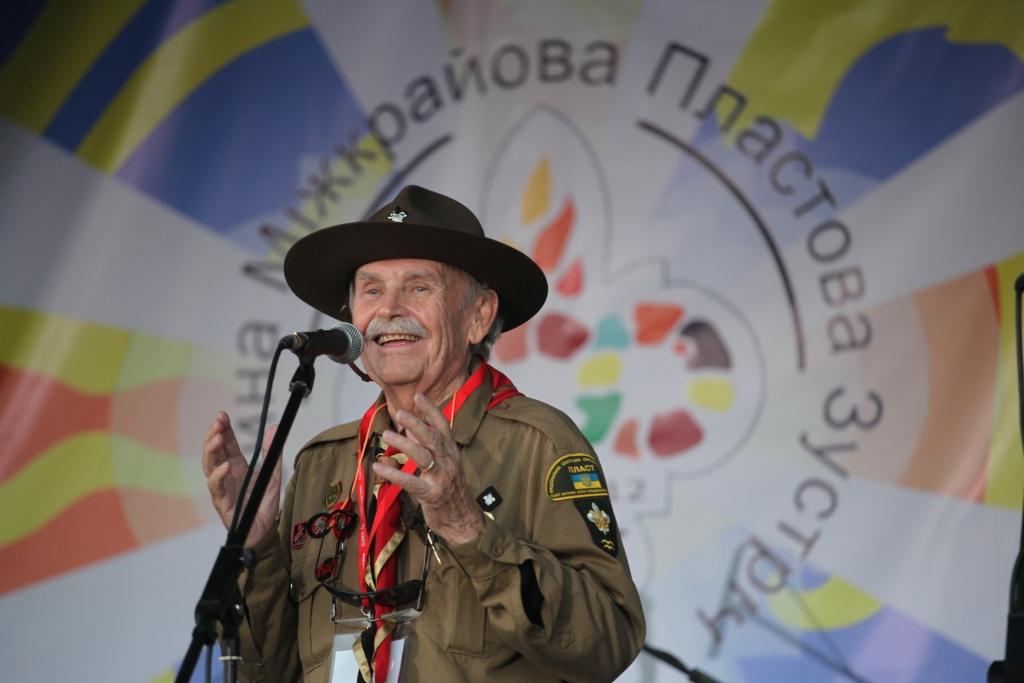 Hawrylyshyn was an active member of the Lisovi Chorty fraternity within the Plast Ukrainian Scouting Organization. From 2006 to 2008 Bohdan Hawrylyshyn was a Chaiman of the Board of Plast.