Every year on October 22nd, people around the world celebrate Wombat Day.

There are many cool things you might not know about them. 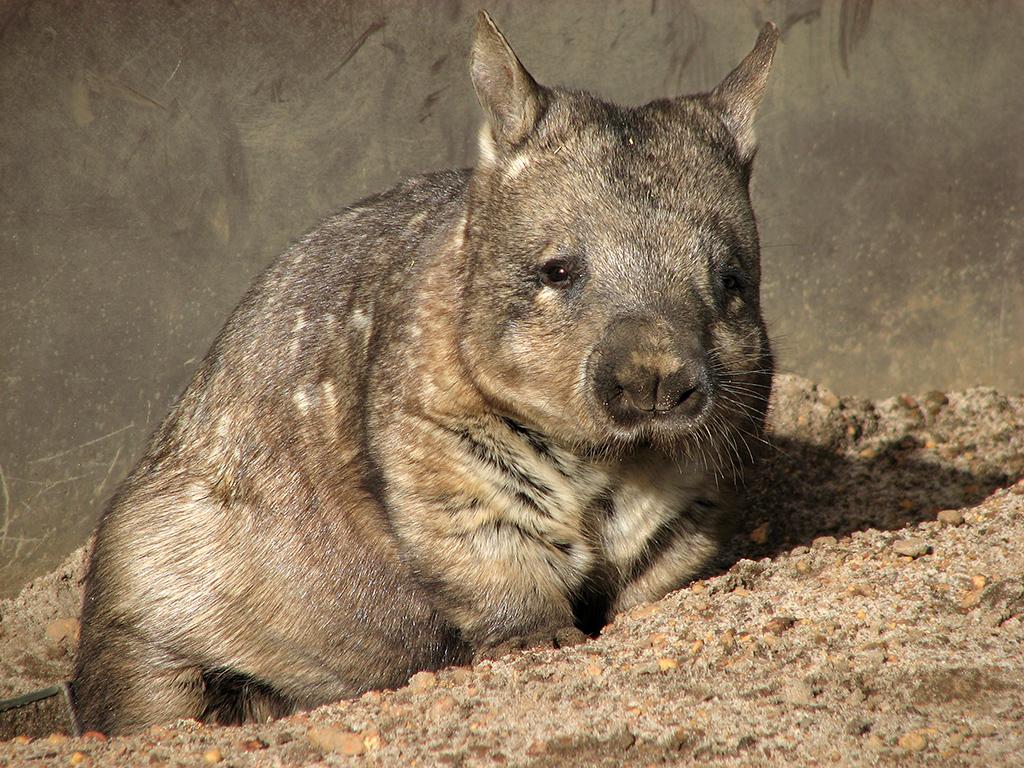 Wombat is an animal that belongs to group of marsupials. It can be found in southeastern coastal regions of Australia and on the surrounding islands. Wombats prefer wet and forested areas on the slopes, open grasslands and eucalyptus forests. All wombat species are divided in two groups: bare-nosed and hairy-nosed wombat.

Wombats are considered as pests in certain parts of Australia because they damage crops and protective fences. Farmers do not hesitate to kill them to protect their lands. Other threat to survival of wombats is habitat loss. These factors brought Northern hairy-nosed wombat to the edge of extinction.

Wombats are second largest marsupials in Australia. They can reach up to 45 inches in length and up to 80 pounds in weight. Females are slightly bigger than males.

Wombat’s body is covered with fur that can be ochre, dark brown or black in color.

Wombats look like small bears. They have round head, small ears, barrel-shaped body and flat claws.

They’re champion diggers. Wombats dig underground burrows that can be 100 feet long. Number of burrows on their home range can be large, but wombats use only 3 or 4 as the main burrows.

Main burrows are intersected with other tunnels. They have couple of exits and sleeping chambers.

Wombats are great at swimming but they’re rubbish at climbing.

Burrows provide protection against the heat and predators. Wombats are rarely seen in the wild because they spend entire day in their burrows. 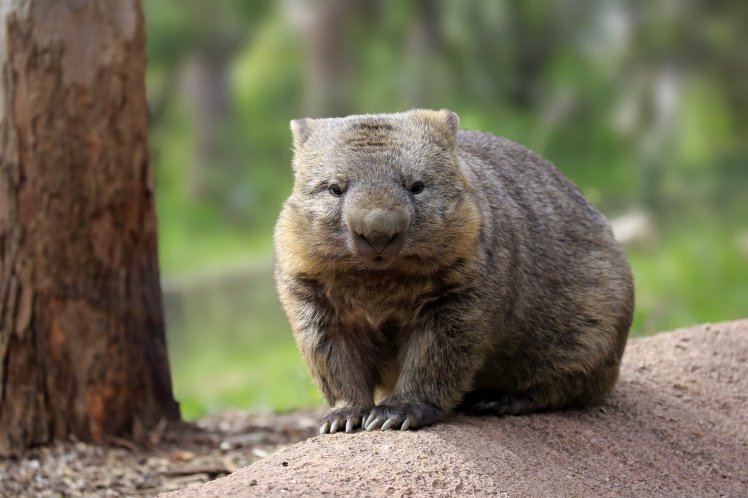 Wombats are territorial and solitary animals. They spray urine, rub their scent on the nearby trees and use droppings to mark their territory.

Wombats are very shy animals. They prefer to live alone, however other wombats are often in nearby tunnels, with some burrows even being interconnected.

Wombats are nocturnal animals (active during the night). When temperature drops down, wombats will leave their burrows to start a search for food.

They have cube-shaped poop. Wombat poop is square. They mark their territories by defecating, and it’s thought that the shape of their poop keeps it from rolling away. 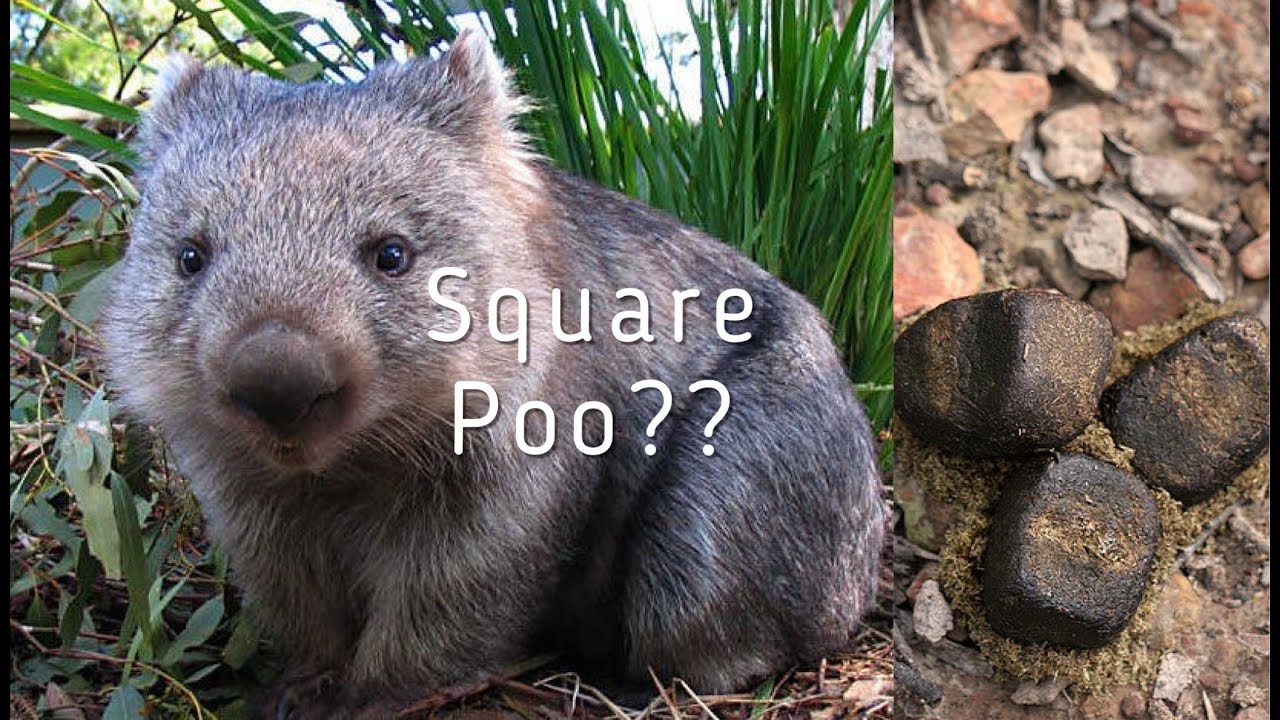 They have teeth like rodents. Plant diet leads to wearing of the teeth. Their teeth grow constantly during their whole life.

Wombats are fast runners. They can run up to 40km per hour, but only for a minute or so. That’s almost as fast as Usain Bolt.

Wombats are very good at jumping.  They’ve been known to escape enclosures by jumping over metre-high fences.

Wombats have terrible eyesight and travel mostly by smell Hence their delightful noses.

Mating season depends on the altitude and latitude of the wombat’s territory (which is directly associated with a climate). It normally occurs during winter period.

Pregnancy lasts 20 to 30 days. Poorly developed baby (called joey) crawls to the mother’s pouch after birth, to continue its development. It attaches to the teat that provides milk required for further growth.

They have a backwards-facing pouch. Like other marsupials, wombats give birth to a tiny, underdeveloped baby that crawls into its mother’s pouch to grow and develop further. But wombats’ pouches have a special difference — they are positioned backwards, opening toward the mother’s rear rather than her head. This allows her to dig without getting dirt in her pouch.

Baby spends first five months in the mother’s pouch. After that time, baby will jump out of the pouch but remain close to the mother for additional nursing or protection against danger. At the age of seven months, young wombat is ready to begin a solitary life.

Average lifespan of wombats in the wild is five years, while they can survive up to 30 years in captivity.

There used to be giant wombats. An ancestor of today’s wombats was a giant the size of a rhinoceros that lived during the Ice Age. It is believed that ancient Aborigines hunted the giant wombat. 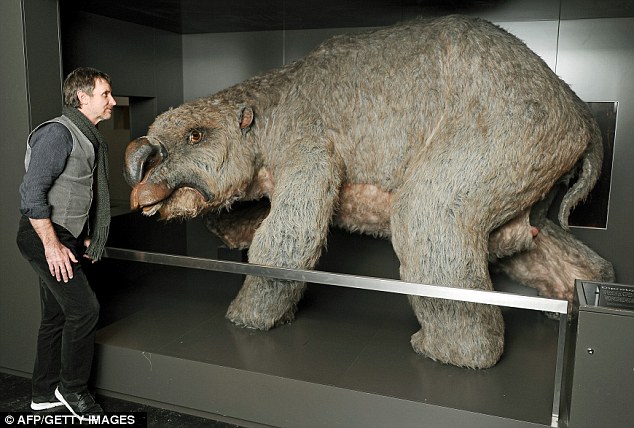