Robert Burns is widely regarded as the national poet of Scotland.

Burns Night is annually celebrated in Scotland on or around January 25.
It commemorates the life of the bard (poet) Robert Burns, who was born on January 25, 1759.
The day also celebrates Burns’ contribution to Scottish culture. 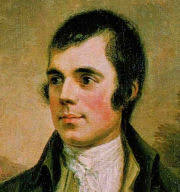 Robert Burns is the national poet of Scotland. In his poems Burns sang the beauty and the glory of his native land. Robert Burns is also known as: “Rabbie Burns”, the “Bard of Ayrshire”, “Scotland’s favorite son” and in Scotland “The Bard”.

Robert Burns was born on 25th January, 1759. His father, a small farmer, was a hard-working man. There were seven children in the family, and Robert was the eldest. His father knew the value of a good education, and he tried to give his children the best education he could afford. Robert was sent to school at the age of six. Robert’s mother knew many Scottish songs and ballads and often sang them to her son in his childhood. Robert remembered mother’s songs and stories all his life. Robert was given a good knowledge of English. His favourite writer was William Shakespeare.

In 1777 Robert moved to another town where he organized a society of young people. They discussed moral, social and political problems of that time.

In 1784, his father died and Robert had to work at the farm. In 1791 he had to sell the farm because he wasn’t successful at farming.

Feeling the injustice of the world, he protested against landlords who owned the best land in his poetry. In 1786 he published a book of his poems which soon made him popular. In April 1787, a second edition of his poems appeared in Edinburgh; 3000 copies were printed – a very large number for those times! Now Burns had the opportunity to see more of his native land which he so dearly loved. He visited some historic places, which made a great impression on him.

Burns took part in creating a book of old Scottish folksongs, writing words for many melodies. Burns is the author of the words of the song «Auld Lang Syne», which Scottish people sing on the New Year’s Day.

Robert Burns died in poverty at the age of 37 from rheumatic heart disease, which he had suffered from since he was a child.

The poetry and songs of Robert Burns are famous all over the world. Robert Burns’ poems and verses inspired Beethoven, Schumann, Mendelssohn and other composers who wrote music to them.

Burns is a democratic poet. His sympathy was with the poor. That is why his funeral was attended by a crowd of ten thousand. They were the common Scottish people whom he had loved and for whom he had written his poems and songs. The most popular poems of Robert Burns are “The Tree of Liberty”, “My Heart’s in the Highlands”, and “My Love’s Like a Red, Red Rose” and many others. 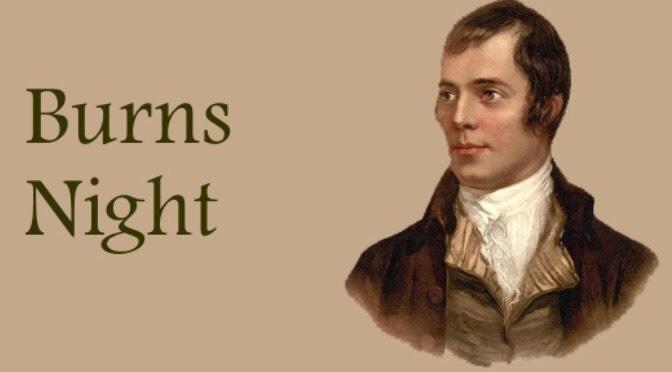 Burns Night is annually celebrated in Scotland on or around January 25. It commemorates the life of the bard (poet) Robert Burns. The day also celebrates Burns’ contribution to Scottish culture. Many people and organizations hold a Burns supper on or around Burns Night. His poems are recited and his songs are sung. Burns’ poetry is loved and enjoyed by all his countrymen. They love Burns for the generosity and kindness, for his patriotism and truthfulness. In his poems he sang the pride and dignity of the Scottish and glorified true love and friendship.

The Scottish flag is often displayed at Burns Night celebrations. It is known as the Saltire and represents the cross of Saint Andrew, the patron saint of Scotland.

Many types of food are associated with Burns Night. These include: cock-a-leekie soup (chicken and leek soup); neeps (mashed turnips or swedes) and tatties (mashed potatoes); cranachan (whipped cream mixed with raspberries and served with sweet oat wafers); and bannocks (a kind of bread cooked on a griddle). Haggis (a type of sausage prepared in a sheep’s stomach) is the main dish. When the haggis is on the table, the host reads the “Address to a Haggis”. This is an ode that Robert Burns wrote to the Scottish dish. Whisky is the traditional drink.

At Burns Night events, many men wear kilts and women may wear shawls, skirts or dresses made from their family tartan. The traditional Scottish music is played.