Ukraine celebrates Christmas on January 6 and 7, according to the Julian calendar.

While the women of the household are busy preparing the multicourse meal (sometimes as many as 12 to 13 courses, representing the apostles and Christ) that varies from family to family and region to region, the children are assigned the task of searching the night sky for the first star. When the star is sighted, it is a signal that the meal can begin.

Svyat Vechir, or Holy Evening, is Ukrainian Christmas Eve. A candle in the window welcomes those without families to join in the observation of this special time, and the Christmas Eve dinner is not served until the first star appears in the sky, signifying the Three Kings. 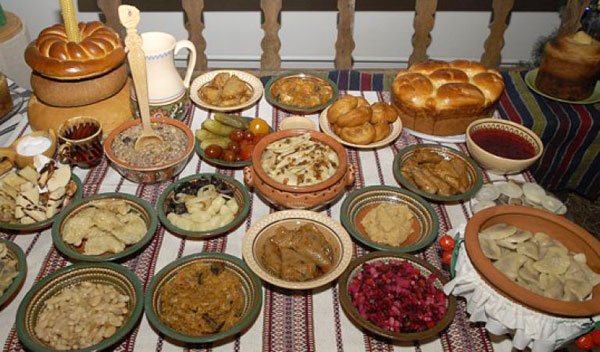 Families celebrate with holiday dishes made especially for the event which contain no meat, dairy, or animal fat, though fish, such as herring, may be served.

Twelve dishes symbolize the twelve Apostles. One of the dishes is traditionally kutya, an ancient dish made from wheat, poppy seeds, and nuts, in which all members of the family partake. A place setting is laid to remember someone who has passed away.

Hay is brought into the house to remind those gathered of the manger where Christ was born and believers attend church services late that night, at midnight, or early the next morning.

An interesting aspect of Christmas in Ukraine is the bringing of a wheat sheaf into the house as a reminder of ancestors and the long tradition of agriculture in Ukraine. The sheaf is called a didukh. 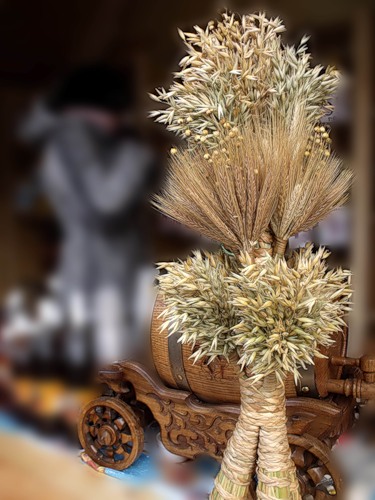 Caroling is also a part of Ukrainian Christmas traditions. While many carols are Christian in nature, still others contain pagan elements or recall Ukraine’s history and legends. Traditionally, caroling involved a whole cast of characters, including a person dressed as a shaggy animal and someone to carry the bag that would be filled with rewards received in return for the songs the carolers sing. There is also someone who carries a pole topped with a star, symbolizing the Star of Bethlehem. 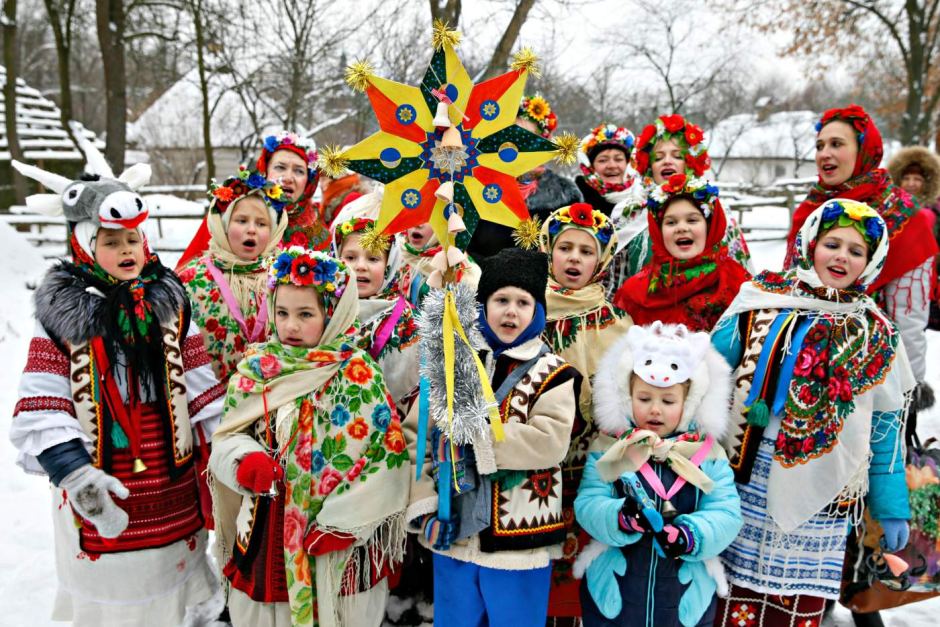 Read the text about Christmas traditions in Ukraine.

Sviata Vecheria, or “Holy Supper” is the central tradition of the beautiful Christmas Eve celebrations in the Ukrainian homes. The dinner table sometimes has a few wisps of hay on the embroidered table cloth as a reminder of the manger in Bethlehem. Many Canadian and American families wear their Ukrainian embroidered shirts on this occasion. When the children see the first star in the eastern evening sky, which symbolizes the trek of the Three Wise Men, the Sviata Vecheria may begin. 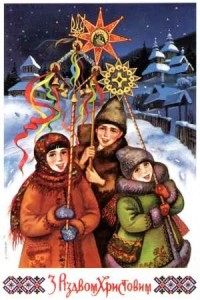 In farming communities the head of the household now brings in a sheaf of wheat called ‘the didukh’ which represents the importance of the ancient and rich wheat crops of Ukraine, the staff of life through the centuries. Didukh means literally ‘grandfather spirit’, so it symbolizes the family’s ancestors. In city homes a few stalks of golden wheat in a vase are used to decorate the table. During the Holy Supper people lay the table with 12 dishes that symbolize apostles – the chosen twelve first sent out to preach for the Christian Gospel. A prayer is said and the father says the traditional Christmas greeting, “Khristos rodyvsya!” (Christ is born!), which is answered by the family with “Slavimo Yoho!” (Let Us Glorify Him!)

At the end of the Sviata Vecheria the family often sings koliadky, Ukrainian Christmas carols. In many communities the old Ukrainian tradition of caroling is carried on by groups of young people and members of organizations and churches calling at homes and collecting donations.