St. Andrew’s Day is celebrated in Ukraine on December 13.

Ancient Christian legend says that Apostle Andrew came to Ukrainian land in the first century A.D. to preach Christianity. He predicted that a magnificent city would appear here. He put a cross on the hill and later on people built a church on that spot.

Kyiv appeared on the Dnipro Hills. Kyivites built a church and named it after Saint Andrew, the disciple of Jesus Christ. 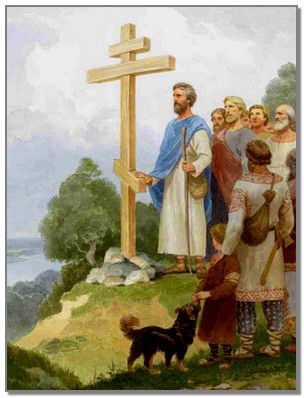 In Ukraine, St. Andrew’s Day was celebrated by our ancestors with fortune-telling and parties where pancakes and pastries were used for games which were supposed to help girls find a husband. It was also a time for mischievous pranks such as putting a plough on a house roof or taking a gate off its hinges. This holiday absorbed pre-Christian traditions connected with courtship and marriage. St. Andrew was considered to be the patron saint of the young people. 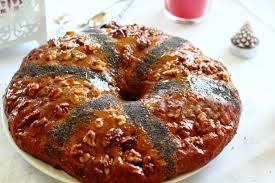 The Feast Day of St. Andrew was called vechornytsy because it was held in the evening. Young men and girls usually played a game called kalyta. The name of the game coincides with the word for a flat dry bread called kalyta. It had a hole in the centre and was decorated with poppy seeds, dried cherries or raisins. Then it was smeared with honey and hung in the middle of the house.

The rituals connected with the kalyta bread could have been an echo of a pagan feast that celebrated ‘the birth of the new sun’. The sun-like shape of the round flat bread that featured in the games the young people played during several days before the winter solstice, may be regarded as evidence that these rituals had ancient pre-Christian roots. After the conversion to Christianity, the bread rituals were performed on the Feast day of St. Andrew.

Nowadays there are performances and parties at schools and colleges on this day. Young people show great interest to old traditions.