I have recently watched a film called ‘Troy’. The film is produced by Wolfgang Petersen. It is starred by Brad Pitt, Orlando Bloom and others. The action takes place in ancient country that we now call Turkey. 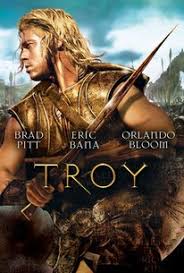 The plot is based on Homer’s Illiad and tells about the battle for the city of Troy. The Greeks conquered the city making a huge horse. It was called Trojan Horse.

The fight scenes are realistic and exciting. Computer graphics and modern technology bring the ancient story of Troy, the Trojan Horse and the Greeks back to life. The film is impressive in its historic detail.

I do not like the film very much because it has a lot of violence.