A film review Pirates of the Carribean

A film review Pirates of the Carribean

Write the review of your favourite film, will you?

One of my favorite films is “Pirates of the Caribbean: at World`s End”. It`s an adventure film, starring Johnny Depp and Keira Knightiey, and it`s the third film in the series.

The story is set in the imaginary world of pirates. Elizabeth, Will and Captain Barbarossa rescue captain Jack Sparrow from a monster called the Kraken. However, they then face the veil Davy Jones and a Chinese pirate called Sao Feng. 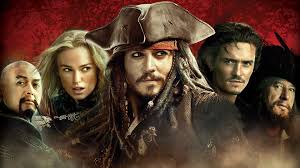 The special effects were amazing, especially the terrifying face of Davy Jones. The acting was excellent too, in spite of the fact that the screenplay wasn’t very good. I especially liked Keira Knightley and Bill  Nighy, who played the part of Davy Jones.

Like the other films in the series it is full of action and really exciting, although, I think the second film in the series was a bit better. Nevertheless, I thoroughly recommend it.