Seasons Months of the Year

Seasons Months of the Year

Let’s learn the names of the seasons and months of the year!

Have practice to know seasons months of the year well.

Speak about Seasons Months of the Year

A year has four seasons. They are winter, spring, summer and autumn. It is cold in winter. It is hot in summer. It is warm in spring and in autumn.

A year has twelve months. They are January, February, March, April, May, June, July, August, September, October, November and December.

December, January and February are winter months. March, April and May are spring months. June, July and August are summer months. September, October and November are autumn months.

Learn the poem about seasons 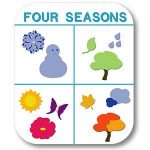