National day of England is 23 April.

St George is the patron saint of England.

St George’s Day is celebrated in England on 23 April, in honour of St George, the patron saint of England.

Who was St. George? 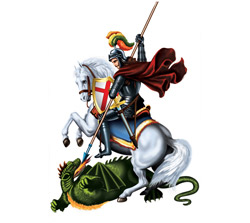 St. George was a brave soldier in the Roman army, who protested against the Romans’ torture of Christians. He was executed for being a Christian on April 23, 303, and is buried in the town of Lod in Israel.

A story dating back to the 6th century tells that St George rescued a maiden by slaying a fearsome fire-breathing dragon. According to legend, the only well in the town of Silene was guarded by a dragon. In order to get water, the inhabitants of the town had to offer a human sacrifice every day to the dragon. The person to be sacrificed was chosen by lots. On the day that St George was visiting, a princess had been selected to be sacrificed. However, he killed the dragon, saved the princess and gave the people of Silene access to water. In gratitude, they converted to Christianity. 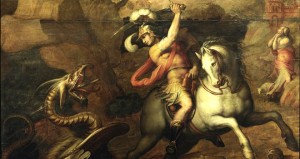 St George’s cross emblem was adopted by Richard The Lion Heart and brought to England in the 12th century. The king’s soldiers wore it on their uniforms during battle to avoid confusion.

It was King Edward III who introduced the battle cry “St. George for England”. The Saint’s name was shouted as a battle cry by English knights who fought beneath the red-cross banner of St George during the Hundred Years War (1338-1453).

The idea of George as the nation’s patron saint probably caught on around William Shakespeare’s time. In Shakespeare’s play Henry V, the English troops are famously rallied with the cry “God for Harry, England and St. George!”.

St. George became the patron saint of England in 1350, when King Edward III formed the Order of the Garter in St. George’s name. The badge of the order depicts George slaying a dragon.

In the UK, the George Cross is the highest medal that a civilian can earn and is awarded for extraordinary bravery and courage in the face of extreme danger. 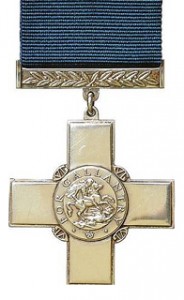 How is St. George’s Day celebrated?

St. George’s Day used to be a national holiday in England. It grew to become a really big deal (almost as big as Christmas) until the 18th century when celebrations waned after England united with Scotland in 1707. 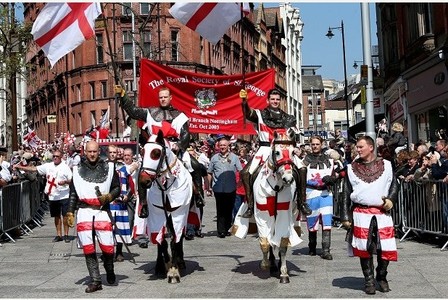 It is now an observance that is celebrated with parades, dancing and other activities. Flags with the image of St. George’s cross are flown on some buildings, especially pubs. For most people in England St. George’s Day is just another ordinary working day.

St. George  is the patron saint of scouting. On the Sunday nearest to 23 April, scouts and guides throughout England parade through high streets and attend a special St. George’s Day service at their local church. 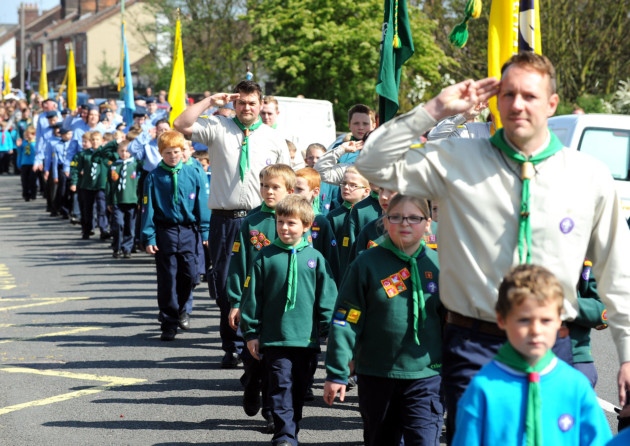 Decorated in red and white for England’s national day, the square is lined with stalls selling traditional English food, inspired by St George’s Day’s 13th-century origins as a national day of feasting. There’s also free themed activities, including games, music and performances for all the family, and you can watch celebrity chefs give live cooking demonstrations.

St. George’s Festival is held in April on the closest Saturday to St. George’s Day.  It is a celebration of traditional art forms such as Morris Dancing, Folk music, mummers plays and Shakespeare.  The overall theme is that of a medieval fair with falconry displays and “The London Tournament” a full contact medieval combat tourney where the London Champion is crowned, surrounded by appropriate stalls and foods, a great family day out. 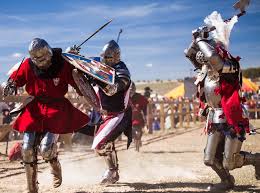 The national emblem and national flower of England is a red rose.