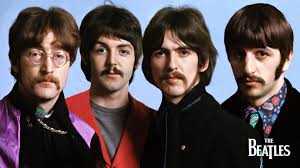 The Beatles were a rock and pop group from Liverpool. They formed a band in 1960. There were four members of band: John Lennon, Paul McCartney, George Harrison and Ringo Starr.

In 1957 Paul McCartney first met John Lennon and asked him to join a band called The Quarrymen. In 1960 the band started to play under a new name, The Beatles. In 1962 Ringo Star replaced Pete Best who left the band. The same year they recorded their first song, Love me do.

In 1964 they made their first album, Please, Please Me, whish soon become a big success. The same year they visited the USA for the first time.

They appeared on one of the most popular TV shows. 75 million people watched them on TV and there were screaming fans wherever they showed up.

In 1967 they recorded their most popular album, Sgt Pepper’s Lonely Hearts Club Band, which brought about a lot of new ideas in music. They used a lot of different instruments. They made the recording sound unusual, too.