Mother’s Day in the UK

Mother’s Day in the UK

Mothering Sunday in the United Kingdom

Mothering Sunday, sometimes known as Mother’s Day, is held on the fourth Sunday of Lent. It is exactly three weeks before Easter Sunday and usually falls in the second half of March or early April. Mothers are remembered on Mothering Sunday in the UK.

What Do People Do?

Mother’s Day, or Mothering Sunday, is now a day to honor mothers and other mother figures, such as grandmothers, stepmothers and mothers-in-law. Many people make a special effort to visit their mother. They take cards and gifts to her and may treat her to brunch, lunch or high tea in a cafe, restaurant or hotel. People who cannot visit their mother usually send gifts or cards to her.

An important part of Mothering Sunday is giving cards and gifts. Common Mother’s Day gifts are cakes, flowers, chocolates, jewelry, and luxurious clothing. Some people do not give a physical gift, but choose to treat their mother or grandmother to a special meal, beauty treatment or fun outing.

Specially decorated Mother’s Day cakes are available in many stores. In the days and weeks before Mothering Sunday, many schools, Sunday schools and children’s organizations help their pupils to prepare a handmade card or gift for their mother.

Mothering Sunday is not a bank holiday in the United Kingdom. Public transport services run to their usual Sunday timetables. Cafes, restaurants and hotels may be fully booked a long time ahead, as many people treat their mother to a special meal on Mothering Sunday. Those wishing to eat in a restaurant on Mother’s Day may need to reserve a table in advance.
Mothering Sunday was originally a time when people returned to the church, in which they were baptized or where they attended services when they were children. This meant that families were reunited as adults returned to the towns and villages where they grew up. In time, it became customary for young people who were working as servants in large houses, to be given a holiday on Mothering Sunday. They could use this day to visit their own mother and often took a gift of food or hand-me-down clothing from their employers to her. In turn, this moved towards the modern holiday, on which people still visit and take gifts to their mothers.

Traditionally, people observed a fast during Lent. Lent is the period from Ash Wednesday until Good Friday. During the Lent fast, people did not eat from sweet, rich foods or meat. However, the fast was lifted slightly on Mothering Sunday and many people prepared a Simnel cake to eat with their family on this day. 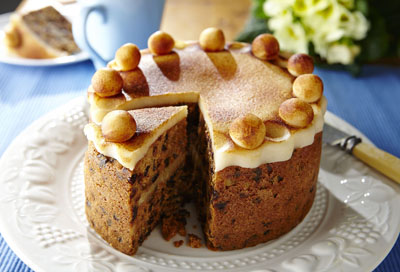