Form 7   Prepare a report about your favourite actor / actress

Julia Fiona Roberts was born on the 28th of October, 1967. She grew in the small town of Smyrna, Georgia, USA, with her mother Betty-Lou, an actress and a church secretary, and her father, who worked as a vacuum cleaner salesman, writer and actor. She has an older brother Eric, and an older sister Lisa.

Little Julia had a tragic childhood. When she was only four years old, her parents got divorced because of financial difficulties. Betty-Lou stayed in Smyrna with her two daughters, While Walter moved to Atlanta and took Eric with him. When Julia was ten years old, her father died of cancer. In school the children teased her because of her thick glasses and her big mouth. At first she took it hard, but then she decided to take advantage of her looks. She accepted her big mouth and made it her trade-mark. She showed her beautiful, hazel eyes by using contact lenses instead of hiding them behind thick glasses. She had never tried to hide the fact that she was tall, her height only made her more grand.

Julia planned to become a veterinarian and had little interest in acting. After graduating from high school, Julia joined her sister Lisa and her brother Eric in New York to go to a theatre school. Before she started acting, she worked at Baskin-Robbins as a shoe saleswoman. Later on she worked in a modeling agency until her brother Eric, who was already into acting, helped her with the first role in the movie “Blood Red”. The movie didn’t go well at all but people started talking about her in Hollywood. In 1988 she played in “Mystic Pizza” and “Satisfaction”. One year later she starred in “Steel Magnolias” and was Oscar-nominated for her part. Next year Julia became a star overnight when she became the whole world’s “Pretty Woman”. Suddenly everybody wanted her. The papers wrote about her every day, and the whole world talked about her. She couldn’t leave the house without reporters and photographers throwing themselves at her.

Her role in “Erin Brockovich” earned her an Oscar and made her the highest-paid actress at the time.

Julia Roberts was engaged to Dylan McDermott and Kiefer Sutherland, married briefly to country singer Lyle Lovett and dated Benjamin Bratt for several years before marrying cameraman Danny Moder in 2002. Since giving birth to twins in 2004, she’s taken on fewer film roles andwelcomed another child in 2007. Her return to the Hollywood limelight coincided with a high point in her career: Roberts earned her fourth Oscar nomination in 2014 for “August: Osage County”. 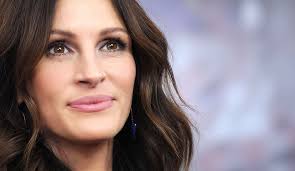 Julia might hide away sometimes to get away from the spotlight, but she always comes back, stronger and better than ever. With her beautiful smile she continues to charm the world.