St. Patrick’s Day in the USA

St. Patrick’s Day in the USA

In Ireland St. Patrick’s Day is a religious holiday. St. Patrick‘s date of birth is estimated to be around the year 389.  He died on March 17th, the day when his memory is honored.

When Patrick was 16 years old, Irish pirates landed near his home in England.  They captured him and took him as a slave to Ireland. There he worked and learned the Irish language, traditions, and way of life.  Patrick, who had been born and raised in a Christian home, was troubled because the Irish worshiped many gods and spirits.  He wanted to convert the Irish people to Christianity. He was able to escape to France and to study to be a priest.  After 14 years of study, in the year 432, the Pope sent him back to Ireland as a bishop. Patrick traveled all across Ireland and established churches and schools.  According to his followers he performed many miracles.  A well-known legend says that he drove the snakes out of Ireland.  He was greatly loved by the Irish people.

St. Patrick’s Day in the USA: Traditions and Customs

Beginning in 1845, many Irish people moved to the United States. They came because there wasn’t enough food to eat in Ireland.  They brought with them their celebrations.  St. Patrick’s Day celebrations helped the Irish to remember their country, their music and their families.

This holiday in the USA has come to represent the Irish culture and the great contributions of its people to the United States.  Many famous politicians including Presidents Kennedy and Reagan are of Irish descent.

On March 17th, many people in the USA commemorate St. Patrick, the patron saint of Ireland.  New York City, where there are many people of Irish descent, holds the famous St. Patrick’s Day parade.  Bands, marches, celebrities (especially politicians), and bystanders come to participate.  More than 150,000 people march in the parade.  Almost a million people line in the streets to watch.  A green stripe is painted down the centre of Fifth Avenue, and the lights on top of the Empire State Building are turned green, the color that represents the Irish people. Millions of real shamrocks are flown from Ireland to the United States.  They are used for decorations.  Everything turns green on St. Patrick’s Day.  Green and gold pennants and green balloons are sold by the hundreds.  In Chicago, the Chicago River is dyed green! 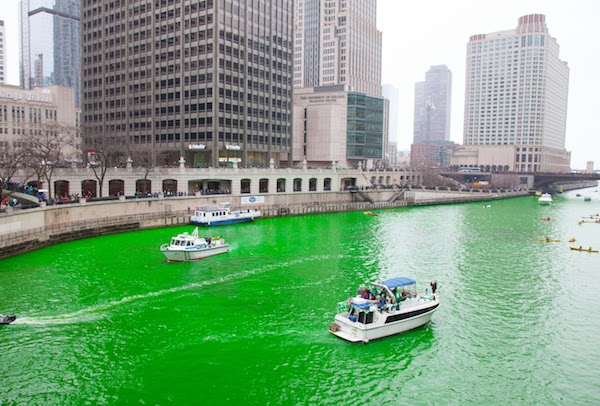 May your pockets be heavy and your heart be light.

May good luck pursue you each morning and night.