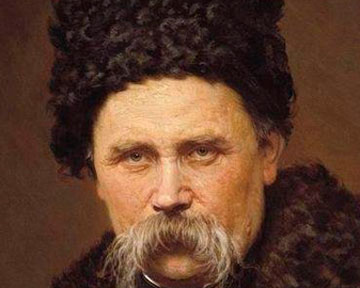 Read the text and do the exercises.

Taras Shevchenko (1814-61) is an outstanding Ukrainian poet, artist and thinker.

His first collection of verse, Kobzar (1840), marked a new stage in the development of Ukrainian literature. His poems Kateryna, Haidamaky, drama Nazar Stodolya (1841 –43), collection of verse Three Summers (1843-45), also The Women Servant, Heretic and My Testament (1845) are mainly focused on the theme of struggle against tsarist autocracy.

The dissolution of the Brotherhood of Sts. Cyril and Methodius, arrest and exile failed to bend the poet’s iron will. Verse written in exile appeared as the Barracks series. It was also in exile that Shevchenko created his unmatched intimate lyrical pieces, also historical works and prose writings in Russian, based on antiserfdom poems under the same titles. He also wrote a textbook for Sunday schools. (e.g. Bukvar Yuzhnorusskiy) (The South Russian ABC), 1861.